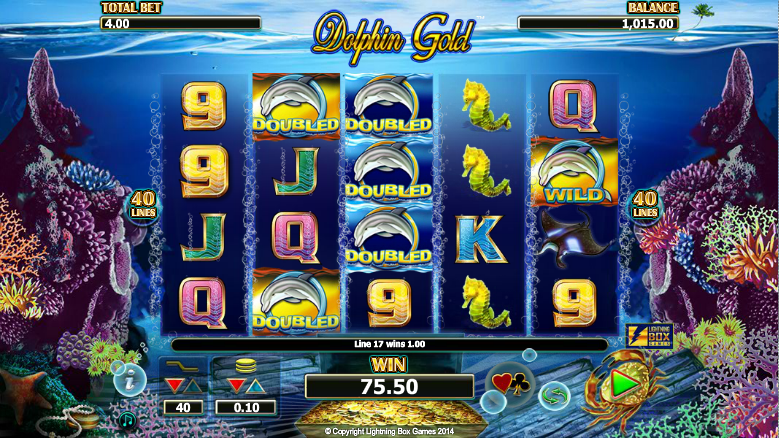 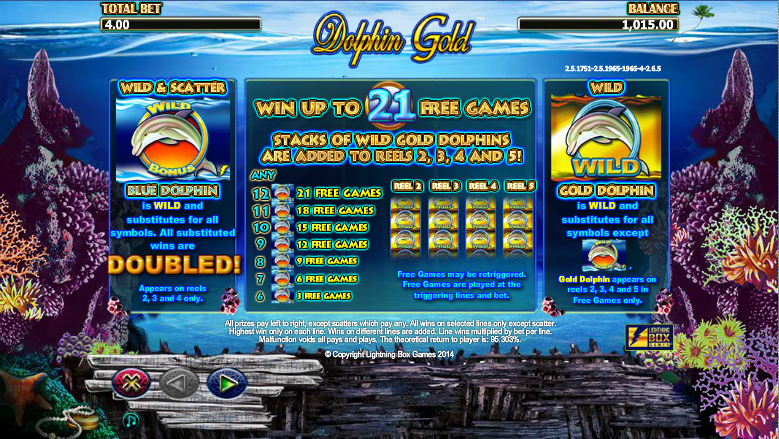 The seabed is a colourful place and we know that for a fact because we are online slots fans and we have played many games with the ocean as the theme. Dolphin Gold is one more to add to the list, it’s from Lighting Box and it assails players with the noises of the sea as soon as you being spinning the reels.

Dolphin Gold is a five reel slot with four rows and up to forty paylines; the seabed scenario is one we’ve seen before but it’s of a high quality with plenty of coral and subterranean undergrowth brightening up the proceedings. The reels are separated by lines of bubbles and you will notice a little gang of shellfish climbing up them very so often.

A range of underwater creatures represent the high value symbols including a turtle, a flatfish, a seahorse and stripey, tropical fish; 9, 10, J, Q and K make up the lower values.

The wild and the bonus symbols are one and the same – a dolphin leaping in front of a setting sun appearing stacked on reels two, three and four. Any wins featuring the wild in the base game are doubled.

This is triggered by collecting the wild/bonus dolphin symbols on reels two, three and four; because they appears stacked it’s possible to land up to twelve of those symbols at once for which you will receive:

During these spins the dolphin symbol is still active but extra gold dolphin stacks are also added to reels two, three, four and five for extra winning opportunities.

Dolphin Gold is probably one of the better fishy online slots with some nice graphics and a poshed up free spins round. The sound effects are interesting and there’s an RTP of 96.30%.