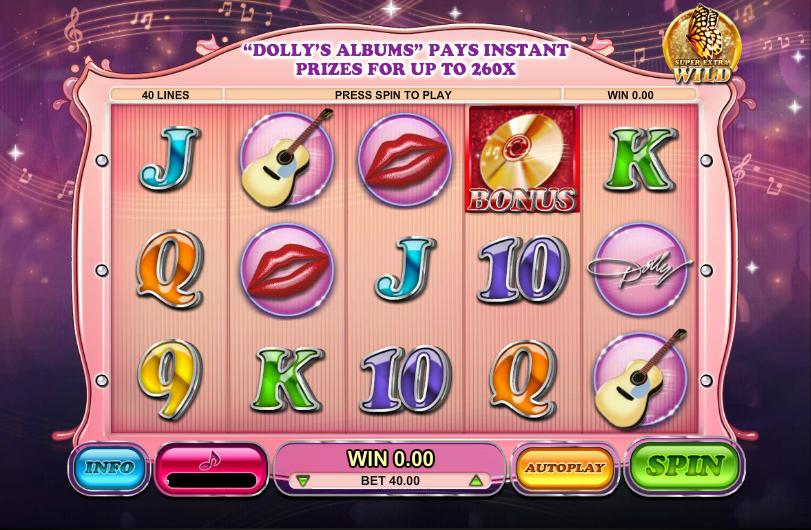 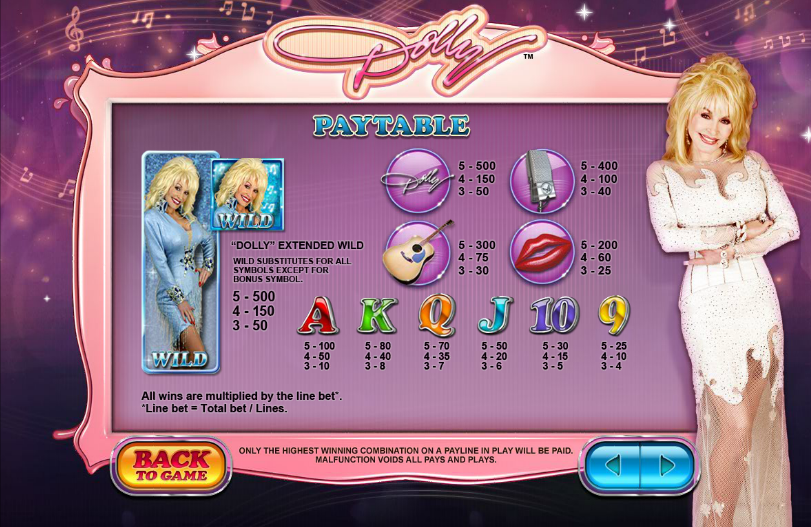 One of the most famous names in country music finally has an online slot dedicated to her and it’s about time too! Dolly Parton is the legendary singer-songwriter responsible for timeless tunes such as “9 to 5” and “Jolene”. This game is developed by Leander Games (now under the Amaya Gaming umbrella) and it includes four different bonus features as well as the opportunity to select one of Dolly’s tunes for the background sounds.

Dolly Parton is a five reel slot with three rows and forty fixed paylines; everything is designed in shades of pink and the ornate reels spin on a backdrop of sparkles and musical notes. The soundtrack will be one of the eight tunes you can pick from.

There are four Dolly-themed symbols including her signature, a microphone, a guitar and a pair of lips; lower values are the standard 9, 10, J, Q, K and A. Dolly herself is the expanding wild which will extend to cover all positions on a reel if a win is possible. There’s also a Super Extra Wild (described below) and a gold disc bonus symbol.

happen randomly on any spin and you will see butterflies landing on reels four and five, turning those particular positions wild. They won’t always help with wins but those they do will obviously be four and five symbol combos.

This is triggered by landing three of the gold disc bonus symbol anywhere on reels three, four and five; you will now get to spin the Wheel Of Wealth and this will determine which of the following features are awarded:

Dolly Parton is good stuff and we’ve enjoyed playing it – the customisable background music and numerous bonus feature make it one to check out and it has an entirely-reasonable RTP of 94.59%.