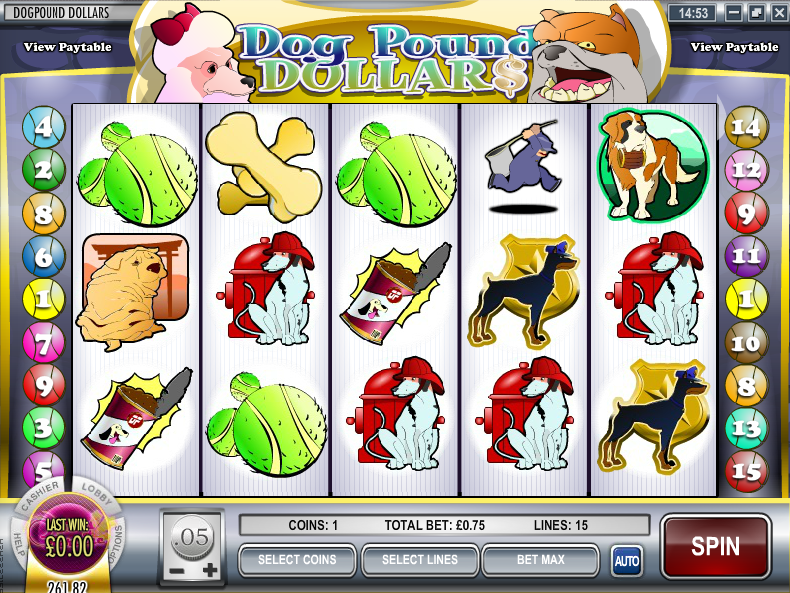 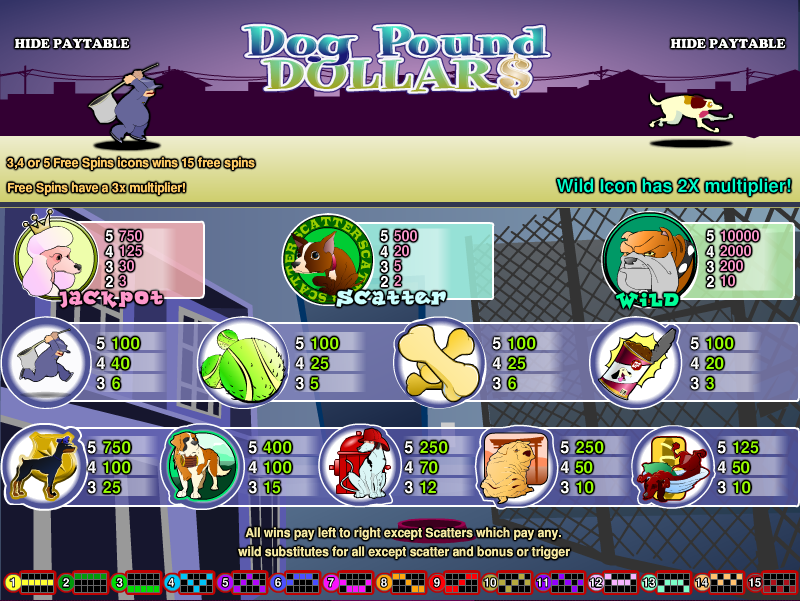 The mean streets and alleys of some nameless city are the setting for this online slot machine from Rival Gaming. It’s called Dog Pound Dollar$ and it follows the efforts of group of dogs to avoid heading to the dreaded pound. On their trail is the catcher with a comedy giant net in which to trap his prey.

Dog Pound Dollar$ plays out over five reels and fifteen paylines and it’s fair to say that this is one of Rival’s graphically less sophisticated games. There’s no backdrop to the reels but the game does kick off with a short intro movie which introduces some of the hapless hounds.

The symbols are all dog-related and include the dog catcher, tennis balls, bones, cans of dog food and then six canine characters posing in various position and with various items. The ridiculous pink poodle with a crown on it’s head is the most valuable and worth 750x your line stake for five on a winning payline.

The grumpy bulldog is wild and there’s a green scatter symbol which is represented by small chihuahua. If a wild symbols helps to make a winning combination it will multiply that win by 2x.

You’re aiming for some free spins when you play this slot and they are triggered by landing three, four or five of the chihuahua scatter symbols anywhere on the reels.

For this you will receive fifteen free spins with all wins during this round subject to a 3x multiplier. More spins are available if you can land more chihuahua scatters during this feature.

Scatter symbols are the key to the free spins and they don’t need to be on an active payline to trigger this feature. Low rollers will appreciate the ability to wager minimum stakes and paylines and still have the same chance of reaching the free spins.

Compared to some of Rival Gaming’s more recent releases, this is pretty basic and unimaginative. The sound effects are certainly a bit odd and we would recommend trying something else.