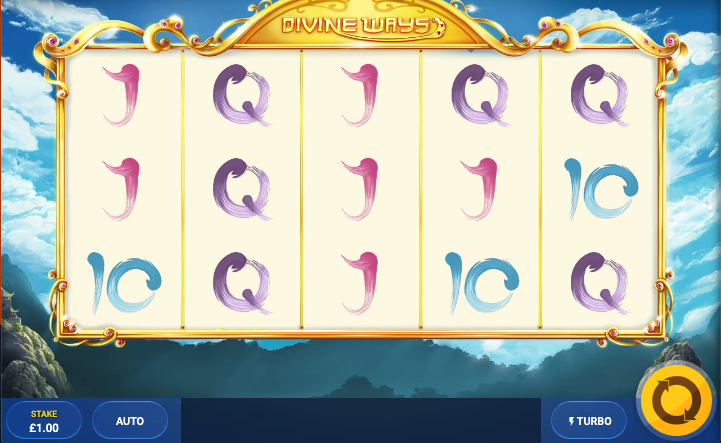 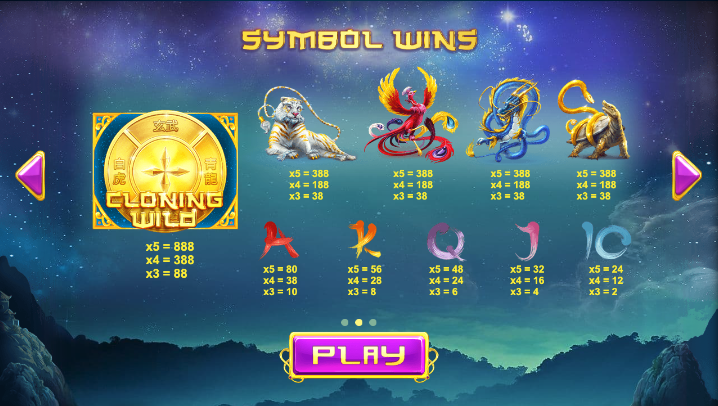 Chinese myths and legends have a lot answer for when it comes to the inspiration for a multitude of online slot machines; Red Tiger Gaming have developed more than a few of those and Divine Ways is one more to add to the list. It’s a little light on complex bonus features but strong on atmosphere and design.

Divine Ways is a five reel slot with three rows and twenty fixed paylines; there’s a delicate oriental soundtrack to the gameplay which takes place on thin, golden reels floating against a backdrop of lofty mountain peaks and clouds in a blue sky.

The four high value symbols are beautifully illustrated animals – the tiger, the phoenix, the dragon and the turtle; 10, J, Q, K and A make up the lower values.

The wild symbol is a golden coin which will substitute for all others to help form winning combos; it’s also the most valuable and worth 888x your stake for five on a payline.

There may be no free spins in Divine Ways but the Cloning Wilds feature should make up for that omission; it’s triggered each time you land a wild anywhere in view and you’ll see that symbol start to clone itself to neighbouring positions on the reels. Eventually it will stop and and any payouts will be evaluated with all those wilds in place – our experience is that there are some big wins available during this feature.

Divine Ways is a very enjoyable slot despite the relative dearth of bonus features; you’ll be constantly on the lookout for the wild symbol which, in this game, is the key to winning.