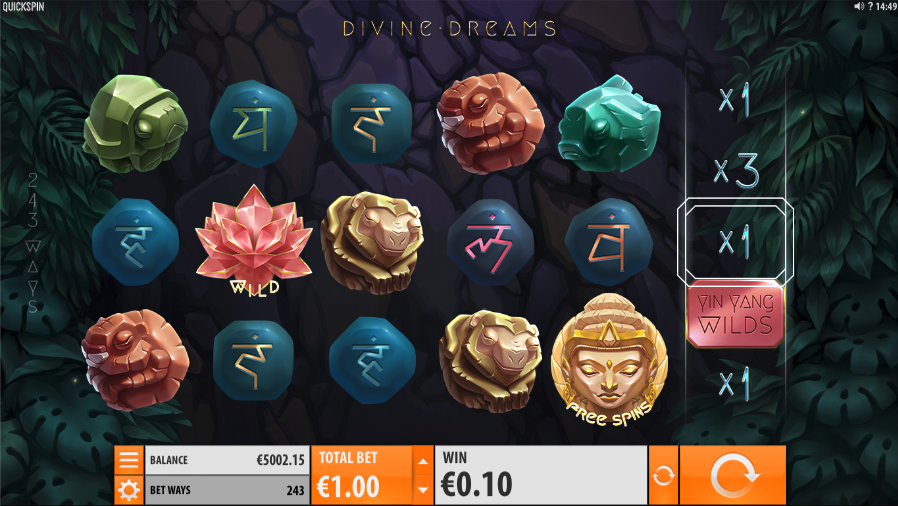 Some online slots are just asking us to dim the lights and turn up the soundtrack to create the proper ambience before starting to spin the reels; Divine Dreams is one such game, it’s developed by Quickspin and it comes with Yin Yang Wilds along with several free spin rounds.

Divine Dreams is a five reel slot with three rows and 243 ways to win; rocks and trees form the backdrop to those transparent reels and there’s some gentle, faintly Chinese music to add to the dreamlike atmosphere. The sixth reel to the right includes multiplier values and bonus rewards.

The five higher value symbols are all stylised animals and include a boar, a squirrel, a lion, a turtle and a fish; the lower values are stones inscribed with rune-like engravings.

The pink flower is wild, it appears on reels two, three, four and five and it will replace all others to help form winning matches except for the Golden Goddess scatter symbol.

The reel to the right of the main set is active on every spin and it will award one of the following results:

This is triggered by landing three, four or five of the Golden Goddess scatter symbols anywhere on the reels for which you will receive 8, 12 or 20 free spins respectively; the bonus reel is once again active but this time it also includes a ‘+ 3 Free Spin’ award which will of course give players three extra spins. It’s not possible to trigger the round again though.

Divine Dreams is a joy to play with its stunning graphics, captivating gameplay and clever range of bonuses tied to the bonus reel; turn the sound up, turn the lights down and see where this slot takes you….