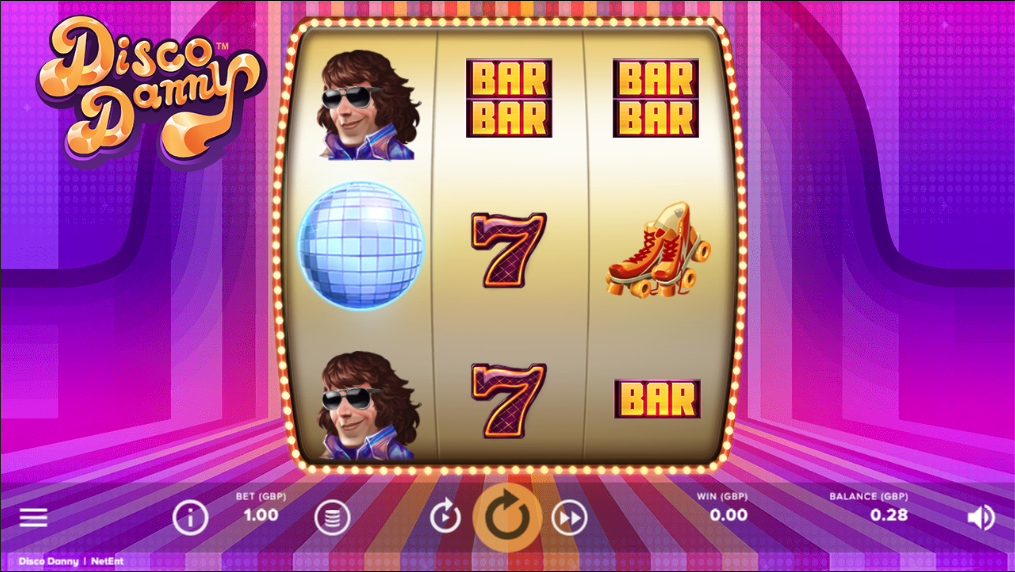 The heyday of disco music was the 1970s and it’s back to this stylish decade that we are now headed in the company of Disco Danny – he’s the long-haired theme of this online slot from Net Entertainment which promises players glitter balls, free spins and some funky sounds.

Disco Danny is a three reel slot with three rows and just five paylines; those reels spin within a frame of tiny lights which floats against a stripey, purple backdrop across which white lights flash.

Symbols in this game include Danny, his retro roller skates, the sparkly seven and then triple, double and single bars – those bars can land in any combination and the result will be a small win. Special symbols include the Disco King (Danny in gold sunglasses and massive white collar) and the silver and gold glitter balls. The Disco King scatter is the most valuable symbol and worth 100x the stake for three anywhere in view.

Every time the gold glitter ball lands on the reels it will award an instant, random win of 10x or 20x the stake.

This is triggered by landing three silver glitter balls or two silver and one gold glitter balls; only golden glitter balls appear on the reels during this round and the three which triggered the bonus lock in place. You’ll start with three free spins and each new gold ball landing and locking will reset that number to three again.

Each golden ball also displays a multiplier value of between 1x and 50x; filling all positions with the gold balls will award the total of all those multipliers (applied to the bet) and move you to the next level; there are five levels in total and each of these also has a multiplier (1x, 2x, 3x, 5x and 10x) which is applied to the win. Each new level will start with no gold glitter balls and the round ends when all positions are filled on level five or there are three spins without a new ball.

Disco Danny is an entertaining trip back to a time when flares and wild facial hair were the norm – the five paylines here will suit those who prefer a high variance slot with fewer but larger wins. The luckier players will appreciate the big wins available in the free spins and everyone should enjoy the funky soundtrack.