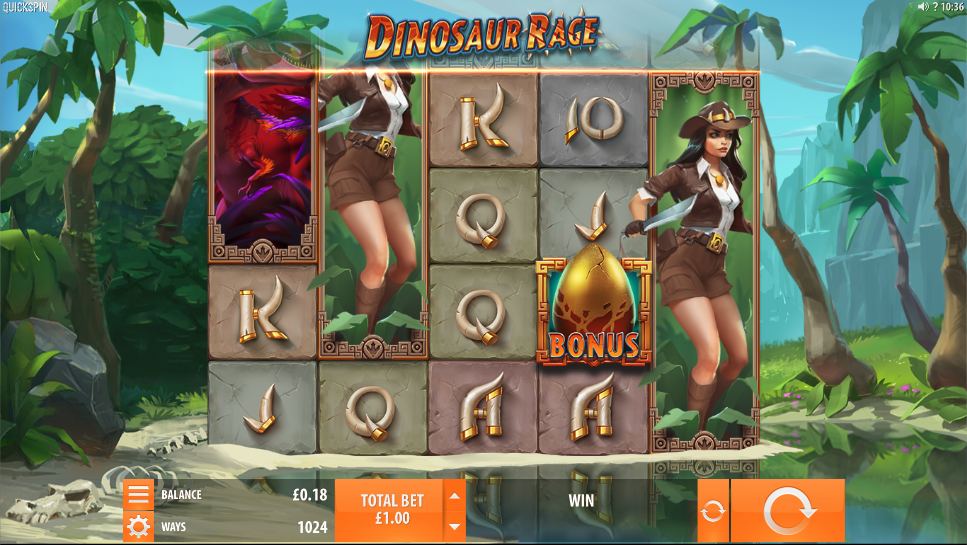 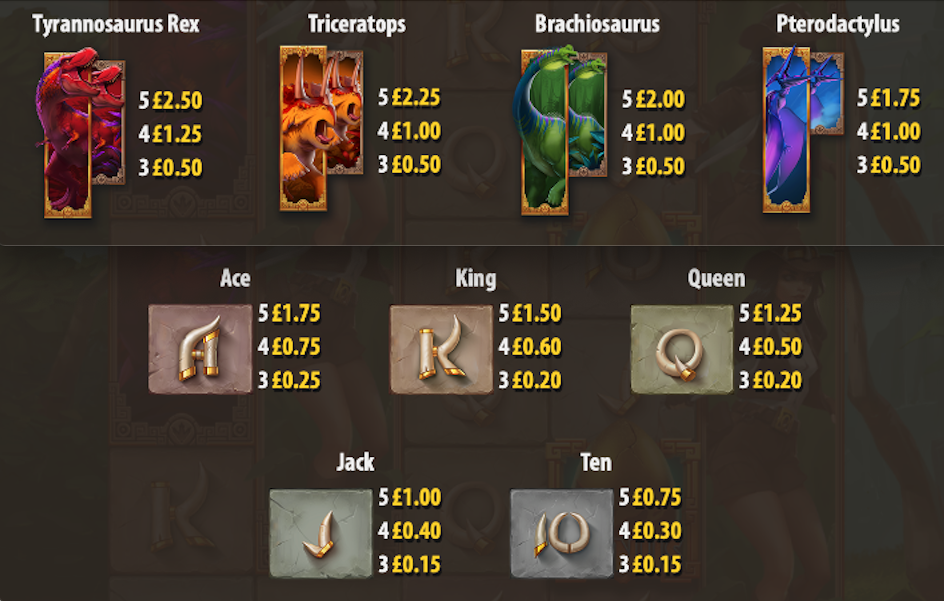 Dinosaur-themed online slots don’t come along too often so we should appreciate them all the more when they do turn up – this one’s called Dinosaur Rage, it’s developed by Quickspin Gaming and from £0.20 per spin it offers players free spins, upgrading symbols and Quickspin’s Pay Anywhere feature.

Dinosaur Rage is a five reel slot with four rows and 1024 ways to win; all the action takes place on Lost Island where Anna the Explorer has found herself after her last outing in Ark of Mystery. Dinosaurs abound on this island of mountains, palm trees and giant, bleached skeletons.

The four higher value symbols can all appear stacked and they’re all dinosaurs – Tyrannosaurus rex, Triceratops, Brachiosaurus and Pterodactylus; 10, J, Q, K and A are the lower values. Anna is wild and the golden dinosaur eggs are the scatters.

Anytime Anna appears fully stacked it becomes possible to create winning combos anywhere on the reels; wins don’t have to start on the left hand side or even be on adjacent reels as long as there are enough on an active payline.

If Anna partially appear she may be nudged completely into view to trigger this feature.

Landing at least three of the dinosaur egg scatter symbols anywhere in view will activate this feature and award the following:

The upgrades we’re talking about here will enrage one dinosaur, enabling it to trigger the Pay Anywhere feature when it lands. Retriggering the round is achieved with at least three more scatters and doing this provides the opportunity to enrage all the dinosaurs – if you manage this all further upgrades will add a 1x win multiplier to the total prize.

Some casinos may offer the chance to buy straight into this feature and this will cost 75x or 150x the stake depending on whether you want to start the round with 10 or 15 free spins.

Quickspin rarely produce anything less than excellent in our view and Dinosaur Rage is an entertaining and enjoyable slot with some clever features and exciting dinosaur action. Highly recommended!

Dinosaur Rage is a dinosaur-themed five reel slot with four rows and 1024 paylines.

The Return To Player percentage for Diamond Blast Zone is 96.11%.

You can play Dinosaur Rage at one of the three casinos listed above or just click the button below to head straight to one of our favourites.