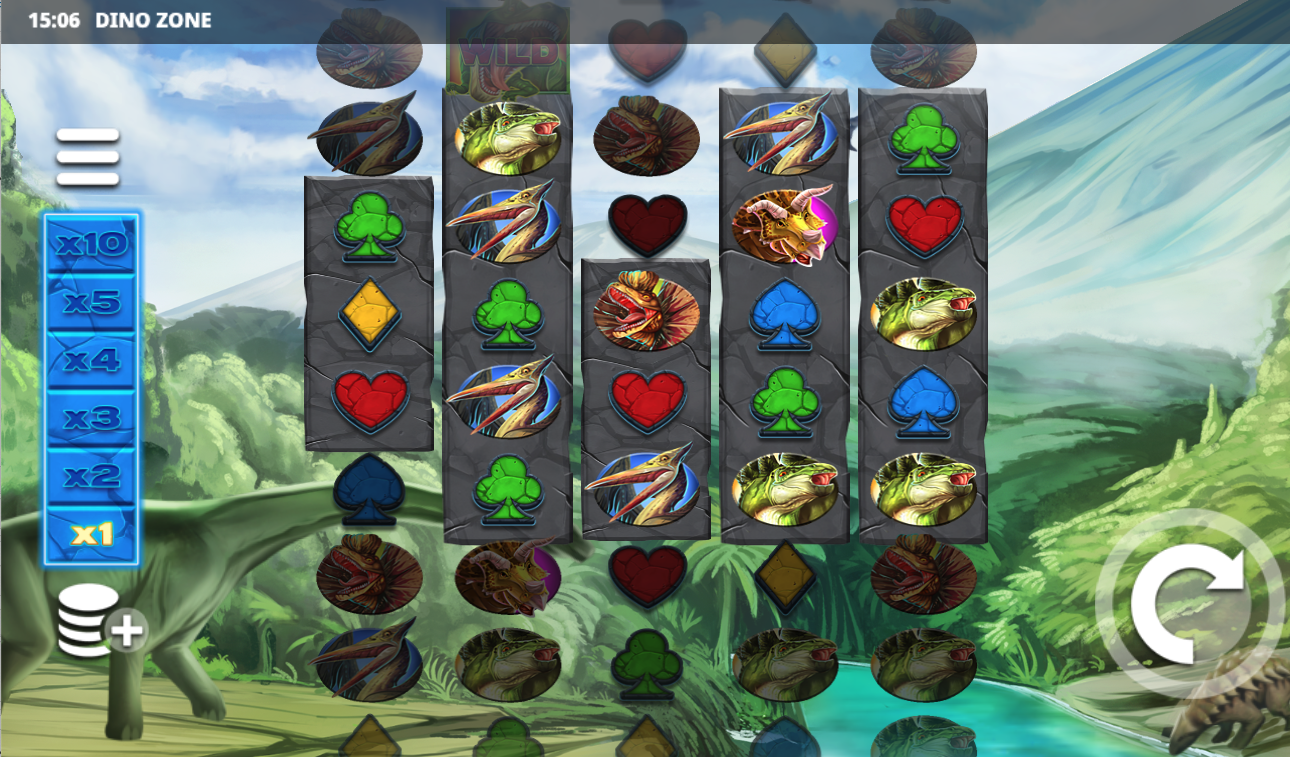 Taking a trip back in time to when dinosaurs roamed the land sounds a bit dangerous so if you’re looking for a safe alternative with some money-making potential why not fire up Dino Zone? It’s an online slot from Leander Games with a ‘Dynamic Ways’ payline structure, cascading reels, mystery symbols and free spins.

Behind those five reels there’s an atmospheric view of some ancient time when the dominant creatures included the Diplodocus and the Pterodactyl, both seen here going about their prehistoric business.

We’ll dip into the Dynamic Ways paylines here because each base game spin can have between 243 and 3,125 ways to win – this is because the active zones on each reel change randomly with each spin and they are between three and five symbols high.

The high value symbols are four dinosaurs which we could try and identify but we’d really just be guessing – suffice to say there’s lots of teeth, scales and horns; playing card symbols in various colours make up the lower values. The T-Rex is wild and the special symbols are the meteor, the mosquito in amber and the volcano.

Any symbols in a winning combo will disappear and be replaced by more falling in from above – this is called a cascade and it can allows the new symbols to potentially create more combos to continue the process. During the base game the win multiplier for the next win increases with each cascade according to the blue meter.

On a non-winning spin or if there are no more cascades, any meters in view will explode, removing a random number of adjacent symbols and creating a new cascade.

The mosquitos in amber are the Mystery Symbols and when the land they’ll always transform into matching ones, hopefully helping out with a win.

Trigger this feature by landing three of the volcano scatter symbols anywhere on reels one, three and five for ten free spins; the active zones now increase so they’re between five and seven symbols high, meaning a payline range of 3,125 to a massive 16,807. The cascade win multipliers are all increased and the meteors will create bigger explosions.