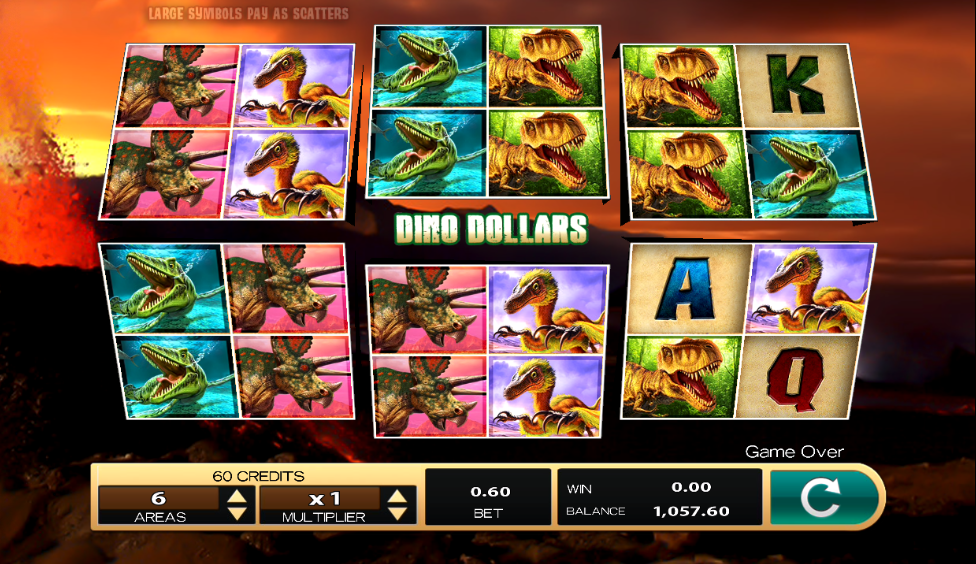 The last of the dinosaurs may have died out some sixty million years ago but they live on in films, television series and of course online slot machines such as Dino Dollars; it’s a game which offers some interesting ‘Symbol Fusion’ gameplay and plenty of free spins.

Dino Dollars contains six separate boxes each with two reels and winning combos are formed by filling up a box with matching symbols, creating one large one; a backdrop of volcanic fire suggests that the last days of these creatures may be approaching.

Four different dinosaurs including the T-Rex and Triceratops represent the high value symbols while Q, K and A make up the lower values.

The large wild symbol is hewn out of rock and it will replace all others to help form winning combinations save for the dinosaur eye and the footprint bonus icons.

This is triggered by filling at least one of the six boxes with a dinosaur eye bonus symbol and for this you will receive the following:

That’s all there is to this round and unfortunately it’s not possible to trigger any more spins.

Trigger this by filling at least one, two or three boxes with dinosaur footprints for you which you will receive two, four or six picks respectively; you’ll now get to play a tiered picking game which will award cash prizes and multiplier values until your picks run out.

Dino Dollars is a slot which offers players something a little different in terms of gameplay – we’re not quite sure whether it’s better or worse than a normal game but you can make your own decision.