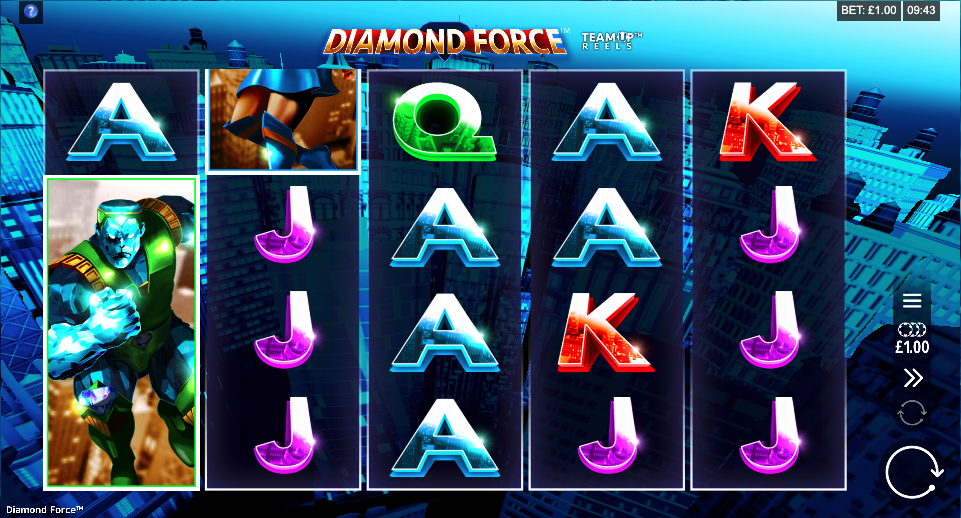 There’s always room for another group of superheroes on our planet so here we bring you Diamond Force courtesy of Microgaming/Crazy Tooth Studios; as well as performing good deeds they’ll also use the Team-Up Reels feature to award free spins and extra reels.

Diamond Force is a five reel slot with four rows and 1024 ways to win; as the reels spin they float through the hazy blue cityscape where these particular heroes make their home.

The four heroes are the four higher value symbols and all can appear stacked on the reels; J, Q, K and A are the lower values. The large diamond is wild, it appears only on reels one and five and it will replace all standard symbols to help form winning combinations; the stacked bonus symbols also appears only on reel five.

Creating a combo of three or four superhero characters will trigger this feature and a new set of reels will overlay the current one; this reel set just contains cash prizes and multiplier values for a guaranteed win. The number of triggering heroes determines the number of Team-Up Reels

Landing at least two full stacks of heroes and the stacked bonus symbol on reel five will award an initial three free spins and these take place on a new set of reels just like the Team-Up Reels bonus. These reels contain cash prizes, multiplier values and also extra spins to be won to continue the round.

The big draw for Diamond Force is the Team-Up Reels feature around which both features revolve; it’s probably not the best superhero-themed slot we’ve played but it’s enjoyable and fast-moving nonetheless.