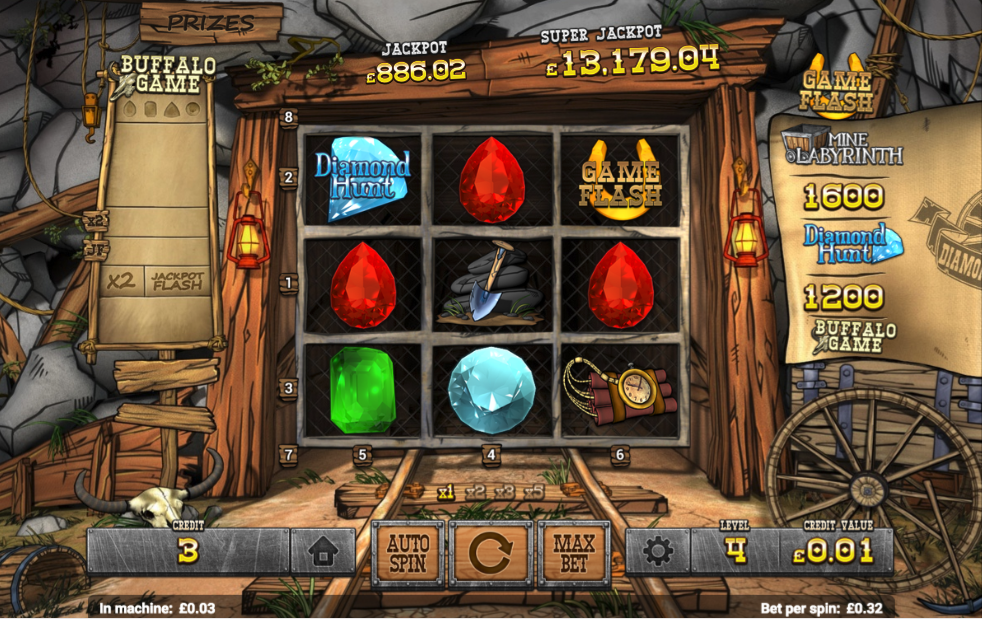 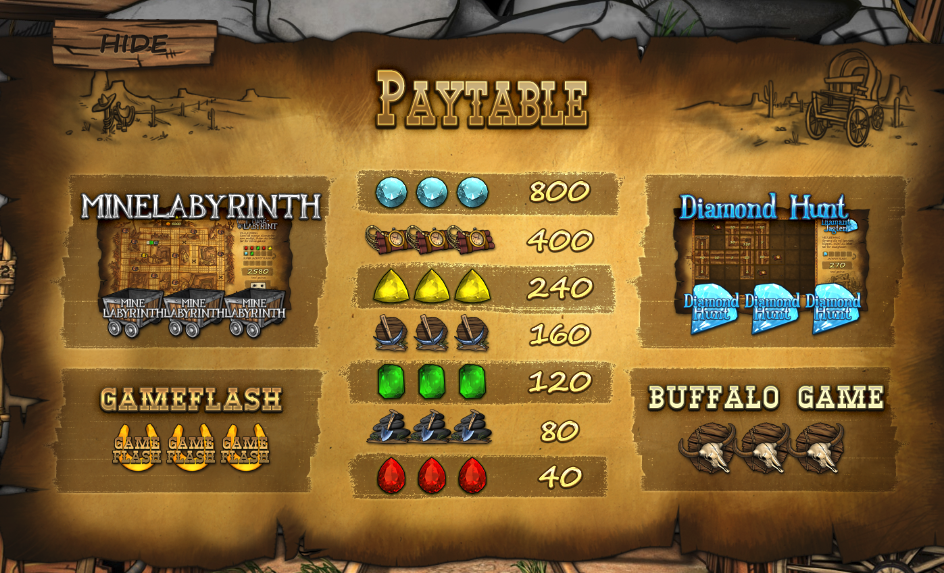 Mining for precious gems generally offers a rich seam of creative possibilities for online slot developers and that’s certainly the case with Diamond Express, a releases from Magnet Gaming with some interesting gameplay, numerous bonus features and a progressive jackpot to aim for.

Diamond Express plays out on a 3×3 grid in which winning paylines can be formed in all directions – horizontal, vertically and diagonally. Those reels spin in the entrance to this unsafe-looking mine into which rail tracks lead.

The standard symbols are all related to theme and include dynamite, pickaxes, shovels and gems of four colours – blue, yellow, green and red.

There are no wild symbols in Diamond Express but there are four bonus symbols – the rail cart, the blue diamond, the horseshoe and the buffalo skull.

Each winning combination in Diamond Express will disappear to be replaced by three new symbols; any new wins will be subject to an increased multiplier – 2x, 3x and then 5x as the process continues.

This is triggered by landing three of the Game Flash horseshoes on an active payline and you will now be awarded one of the coin prize shown on the right hand side or entry into one of the main bonus features.

Trigger this by landing three buffalo skulls on an active payline and you will see one of the base game gems chosen in the ‘Buffalo Game’ chart on the left hand side. You’ll now receive up to sixty free spins in which the aim is to collect that particular gem on the centre row – as this happens the spaces on the chart will fill up, awarding a greater prize as you progress.

Reaching the 2x will double any wins while another four gems will mean you reach the Jackpot Flash game (described below).

This is activated by landing three of the rail cart symbols on an active payline and you’ll now see a screen showing a map of rail lines and treasure chests; the dice will roll ten times and you can choose which route to take to pass the most chests for prizes. A six will award an extra roll.

This is triggered by landing three of the blue diamonds on an active payline and you’ll be taken to a screen displaying a grid; just click on the dynamite to blast a way through and win prizes until there are no options remaining.

These progressive jackpot opportunities are kicked off via the bonus features described above and each will display five different prizes plus the jackpot; a light will flash between them to award one prize – hopefully the jackpot.

Diamond Express is a slot which certainly offers something a little extra and clearly plenty of though has gone into extending the bonus features into little video games themselves. This game may look like a basic three reeler but it isn’t and it comes highly recommended. There’s an RTP of 97.00%.