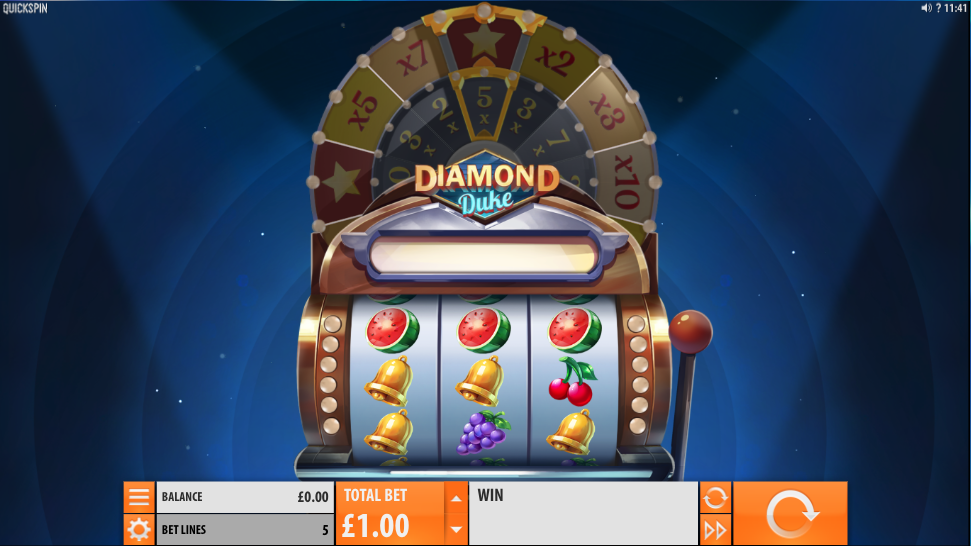 Close your eyes, imagine yourself back in an American diner in the 1950s and you may well spot a slot machine which looks like Diamond Duke – this is an online slot from Quickspin Gaming which combines some retro looks with several Wheel of Fortune-themed bonus features.

Diamond Duke is a three reel slot with three rows and just five paylines; the gameplay takes place on a replica slot machine complete with one-armed bandit lever and the two multiplier wheels above the symbol area.

There are six symbols in play and they are the big, blue diamond, the red seven, the golden bell, the watermelon, the bunch of grapes and the cherries. There’s no wild symbol in this game but there is the ‘Wheel’ scatter which is the key to the bonus features.

This is triggered by landing two of the Wheel scatter symbols anywhere in view and you’ll receive one Bonus Wheel spin – that’s the outer wheel above the reels and it will award a win multiplier of 2x, 3x, 5x, 7x or 10. It can also trigger the Pick & Click feature.

This is a three stage picking round which will award bet multiplier wins of up to 7x in stage one, up to 15x in stage two and up to 100x in stage three; finding ‘collect’ will end the round but finding ‘upgrade’ will move you up to the next stage,

Diamond Duke squeezes some real entertainment into a small package and that’s not always the case with three reel slots – the scatter features seem to hit regularly enough but only the luckier players will always win big with the multiplier wheels.