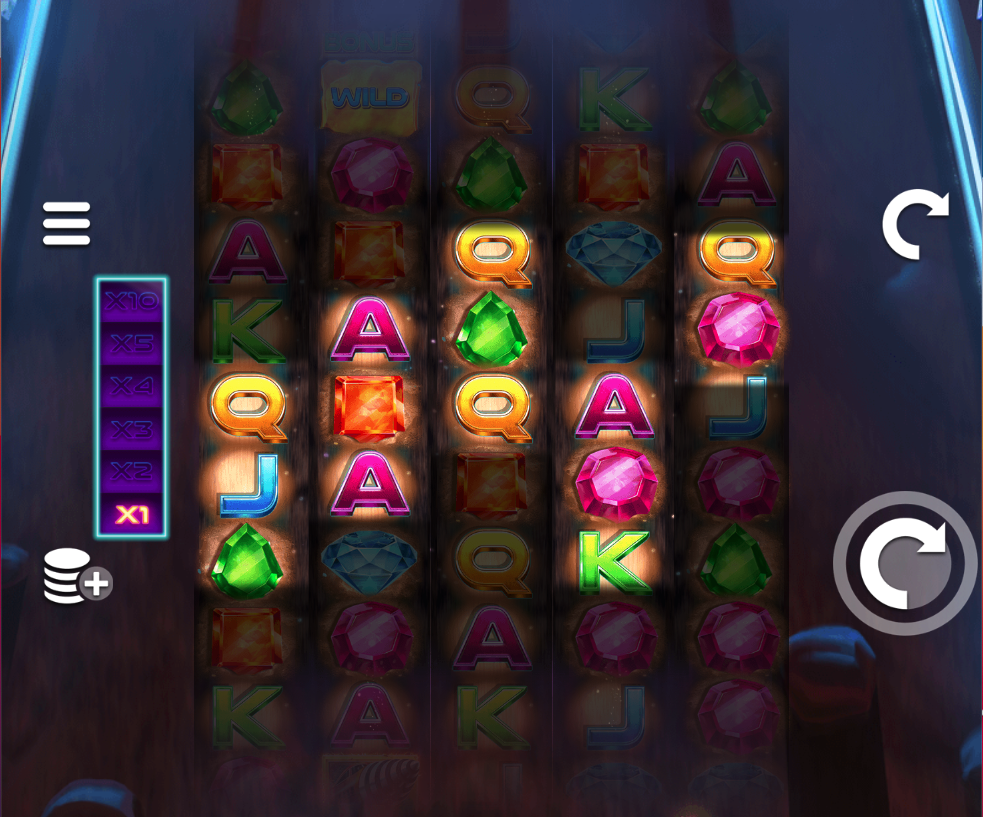 It could be argued that not only are diamonds a girl’s best friend but they are everyone’s best friend and in this online slot from Leander Games they certainly provide the best payouts; it’s called Diamond Blast Zone and from £0.20 per spin there are opportunities for more than 16,000 paylines, free spins and mystery symbols.

Diamond Blast Zone is a five reel slot with variable rows and between 243 and 3,125 ways to win in the base game; the ‘Dynamic Ways’ zone on each reel changes with each spin and can be anything from three to five symbols high resulting the variety of paylines.

The four high value symbols are the diamond and them gems in pink, green and orange J, Q, K and A are the lower values. The blue/gold ‘Wild’ is wild and the special symbols are the bomb, the question mark and the drill.

Any symbols involved in a winning combination will disappear and be replaced by more falling in from above – more combos can then be formed to continue the process. Each successive cascade will increase the win multiplier according to the table to the left of the reels – 1x, 2x, 3x, 4x, 5x and finally 10x.

If any bombs land on the reels they’ll explode after any wins have been evaluated, allowing a cascade into that vacated position. The win multiplier will also increase due to that cascade.

Any Mystery Symbol question marks landing on the reels will all transform into matching standard symbols, hopefully helping out with a win.

Landing three of the drill symbols (picture a giant Channel Tunnel drill) will award eight free spins on a set of reels in which the Dynamic Zone now ranges from five to seven positions, resulting in a payline range between 3,125 to 16,807.

During this round the win multiplier for the cascades increases more quickly ( 1x, 3x, 5x, 7x, 10x and finally 12x) while the blast radius of the bomb increases also. Three more drills will award eight more spins an unlimited number of times.

Diamond Blast Zone is an interesting and enjoyable slot with lots of bonus features and the constantly-changing number of paylines to mix things up; this feels like something a little different from Leander so food for them and good for us as well.

Diamond Blast Zone is a gem-themed five reel slot with variable rows and between 243 & 16,807 ways to win.

The Return To Player percentage for Diamond Blast Zone is 96.08%.

You can play Diamond Blast Zone at one of the three casinos listed above or just click the button below to head straight to one of our favourites.