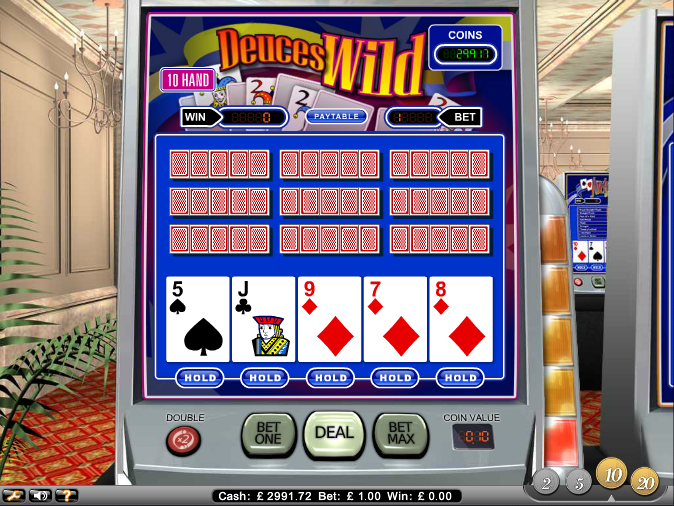 If you though there was only one way to play video poker then we are here to tell you that you are very much mistaken. To be fair there aren’t that many varieties and generally they only differ in which combinations are paid out at the lower end. For example Jacks Or Better requires the lowest winning pair to be jacks – anything less loses. Deuces Wild is a version from Net Entertainment which doesnt’ pay out for any pairs, but it does feature a joker and an opportunity to gamble your wins.

How To Play Deuces Wild

For a NetEnt release this is rather basic looking and you are playing a machine designed to look as though it’s in a casino. The first thing to do is select your coin size in the bottom right hand corner and then the bet level, of which there are five. Switch between them by using the Bet One button. Don’t forget that because this is a multihand game, your stake will be multiplied by the number of hands.  Use the options on the screen to choose the number of hands required – 1, 10, 25 and 50.

Now press the ‘Deal’ button to receive your first five cards; at this point you must decide how many cards to hold (if any) before pressing the ‘Deal’ button again to receive any replacement cards. If you are a winner you will be paid out according to the paytable you can see to the right.

As the name of the game suggests the 2 (deuce) is wild and this offers players several winning hands specific to this game:

The payouts are listed in the paytable. 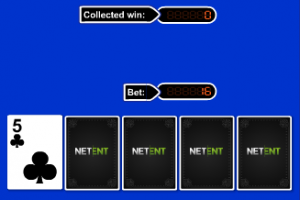 Every time you win you’ll have the opportunity to double that amount by integrating with the box that appears. Choose to ‘double’ ‘double half’ or ‘collect’.

Five cards will appear, four face down and one upturned; you must pick one of the face down cards which is higher than the face up one to win. A similar value is a draw and a lower value is a loss.

The little extras such as the joker and the added winning hands make this well worth a go. It might not look state of the art but who cares when nit’s as playable as this and has an RTP of 97.97%. Check our page on video poker strategy for a few gameplay pointers.