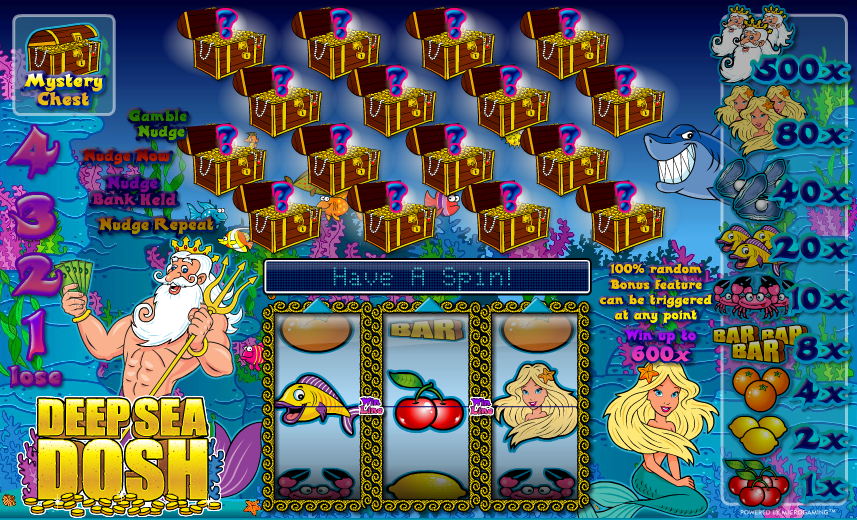 We’ve been checking out quite a few of Microgaming’s fruit machine-style online slots recently so while we’re on a roll here’s one more to add to the list; Deep Sea Dosh is an underwater-themed game featuring Neptune/Poseidon, base game bonuses and a randomly triggered feature.

Deep Sea Dosh is a three reel slot with just a single payline and it’s all set in something of a Disney-fied underwater setting complete with the trident-wielding character, a pretty mermaid and a toothy shark. Basic symbols are the traditional cherries, oranges. lemons and bars but there are also some nautical symbols including crabs, yellow fish, pearls and oysters, the mermaid and the chap with the trident.

Take It Or Leave It Treasure Chest Game

This is a randomly-triggered feature and it involves the treasure chests which you will already have noticed floating above the reels. The reels will slowly fill up with water and the game will begin by opening each chest and showing you a multiplier between 10x and 150x.

Nudges are randomly award to the player after some spins and they allow you to nudge single reels down to try and make winning combos. They may also be repeated, gambled or banked for the next spin.

Holds allow the player to freeze any of the reels in the hope of making a winning combo on the next spin.

After any non-winning spin, the Shifta may appear and rearrange the reels into a winning line.

If you see this message in the notice board above the reels, ignore any holds and just press ‘Spin’ for a guaranteed win.

We’ve not much to offer here because there’s very little strategy involved, the bonus of course is triggered randomly.

Of all the fruit machine-style slots this is probably our least favourite just because there’s so little interactivity – it’s essentially a classic slot with a bonus feature bolted on. It’s quite fun but you probably won’t spend too much time on it.