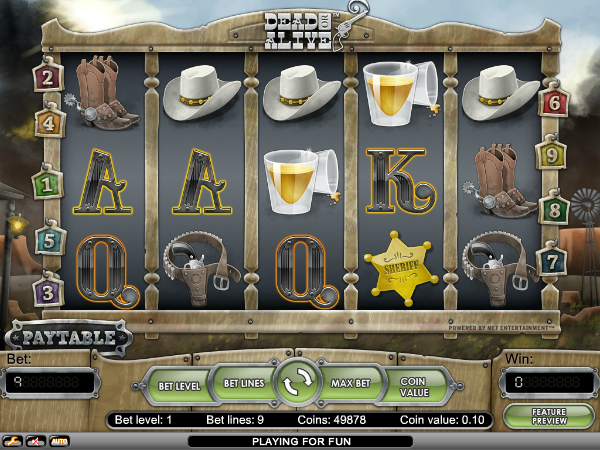 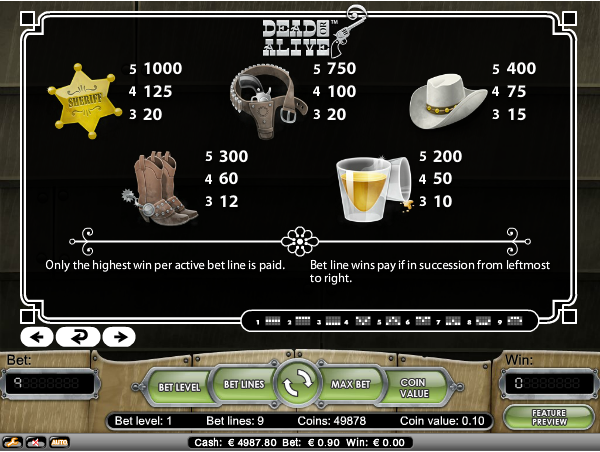 Picture yourself in the Wild West of the United States at the turn of the 20th century and you’ll find yourself where Dead Or Alive takes place; it’s a five reel and nine payline, online slot from Net Entertainment which is full of the sights and sounds of that lawless era.

The reels in this slot are set inside a wooden noticeboard of the type you might have seen in dusty town; the background is a collage of images such as wanted posters and bullet holes.  10, J, Q, K and A represent the lower value symbols and at the top of the tree are a ten gallon hat, a shot of whisky, a sheriff’s badge, cowboy boots and a gun in it’s holster.

The wanted poster is the wild symbol and the scatter is represented by a pair of crossed pistols which trigger the bonus feature.

Three of the crossed pistols landing anywhere on the reels will trigger the bonus game and for that you’ll get 12 free spins with a 2x multiplier.

This is a bonus round which starts off slowly but soon becomes quite profitable; this is because every wild wanted poster you land remains in place for the duration of the spins. There are five different wanted posters in the bonus game each featuring a different character.

If you can land a wanted poster on each reel you’ll get five extra spins but this can only happen once.

Although this slot features just nine paylines, triggering the bonus round seems to be much more profitable than some other games with many more paylines, although our video above doesn’t really demonstrate this.  As always from Net Entertainment the graphics are first class and the background sounds of a saloon piano and gunshots add some real quality to this release.