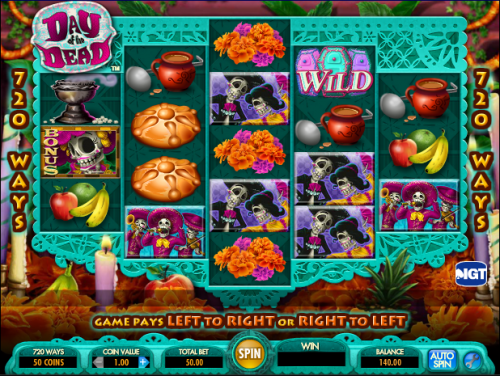 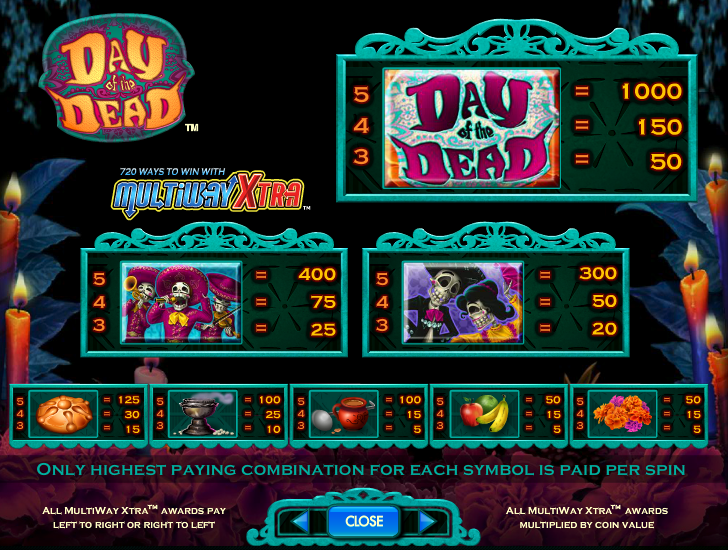 Anyone approaching this online slot with thoughts of battling the zombie apocalypse should probably read this article first.  Day of the Dead is nothing to do with George A. Romero or Shaun of the Dead and zombies don’t feature at all.  The Day of the Dead is a national holiday celebration largely associated with Mexico and it’s essentially a chance to remember those family members have who have passed on.  It may not sound like a captivating theme for an online slot machine but read on to find out why it is.

Day of the Dead is a five reel slot in a hexagonal shape which means that reels one and have three symbols, two and four have four symbols and the centre reel has five symbols.  There are 720 paylines in total and the whole thing looks colourful and celebratory; the symbols from low to high value are flowers, fruit, a large mug, a punch bowl, a pie, black and yellow clothed skeletons, a pink skeleton band and a Day of the Dead logo.

This feature is triggered by landing five yellow bonus symbols on consecutive reels; the relatively low number of reels and the fact you can win left to right and right to left makes this more likely than it sounds.  Land them and you’ll get 8 free spins but if you can land more than one winning bonus symbol combo you’ll get another 8 up to a possible 96.

While in free spins mode, if you land five blue bonus symbols you’ll get another 8 spins and the good news will continue in this vein until you’ve run out of spins or used up an lucrative 240.

There are 720 possible ways to make winning combos in this game so small wins are quite regular.  The slightly unusual reels setup is an interesting idea and the graphics are quite appealing.  The subject matter may seem sombre but the game is bright and fun.