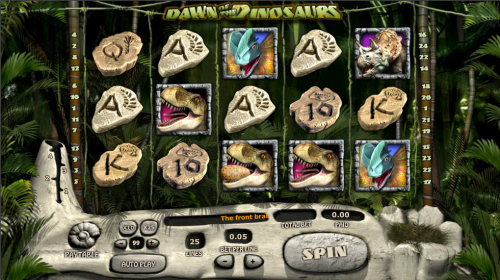 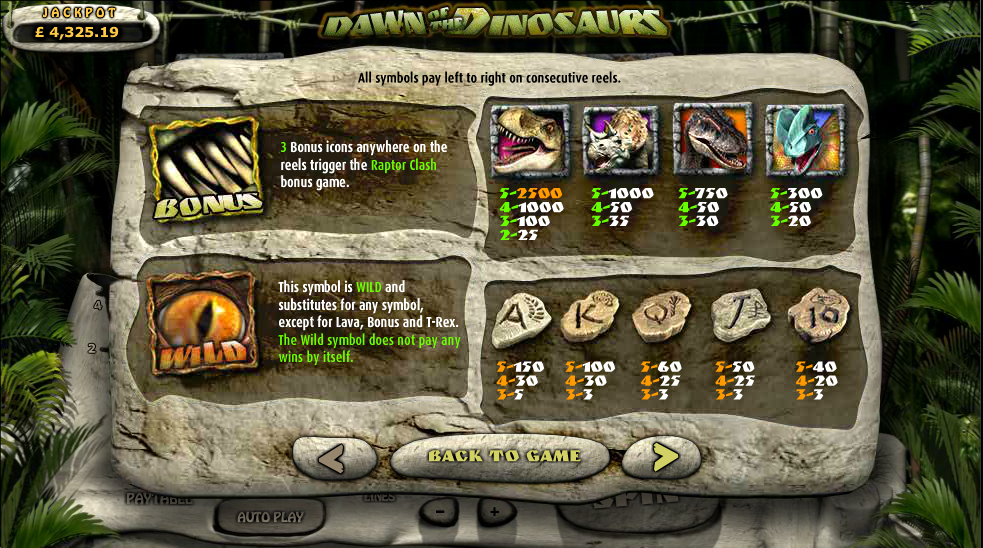 We’re heading way, way back into the distant past for this online slot from Random Logic; the dinosaurs lived in the Mesozoic era between 180 million and 245 million years ago and this slot takes us back to a time when gigantic (and not so gigantic) creatures roamed the earth.

Dawn of the Dinosaurs is a really lovely-looking slot which features five reels and twenty five paylines; the reels hang on vines between trees and in the background we can see an impenetrable jungle.

The low value symbols are clearly historically inaccurate; no humans (or anything similar) lived at the same time as the dinosaurs but what we have here are stones carved with 10, J, Q, K and A.  A prehistoric mystery? Absolutely.

Higher vale symbols are a range of ferocious-looking dinosaurs including a Velociraptor, a Triceratops and a Tyrannosaurus Rex.  Specials are a bonus symbol with massive teeth and a big orange eye wild.

Landing three of the teeth bonus symbols on an active payline will gain you entry to this exciting bonus game.  You take part in a one-on-one dinosaur fight which takes place over five rounds.

Choose your moves on each round and the further you progress, the more money you win

The Combo Completer involves collecting dinosaur eggs which occasionally appear in the mouths of the Tyrannosaurus Rex.  The eggs will float down to the grassy space to the bottom right of the reels.

When two T-rex appear on a payline with just one reel in-between them, an egg will float up and complete the win.  In the same manner 2 eggs will complete a combo which begins with T-rex on reels one, three and five.

Eggs will stay in place even if you leave the game and return to it later.

To the bottom left of the reels you will see a small volcano-like structure with a scale of 1 -4.  While you are playing the game a fiery rock will randomly appear on the reels and fill one place on the volcano.

Once you’ve collected four this mini-game begins and you can choose between the following:

In this game the progressive jackpot is won randomly with no input from the reels or symbols – all you need to know is that the higher your stake, the more likely you are to win it.

Random Logic have created a really beautiful slot here with some fantastic graphics and animations; there’s plenty of appropriately prehistoric sounds going on in the background  and the three bonus features make this slot a winner.