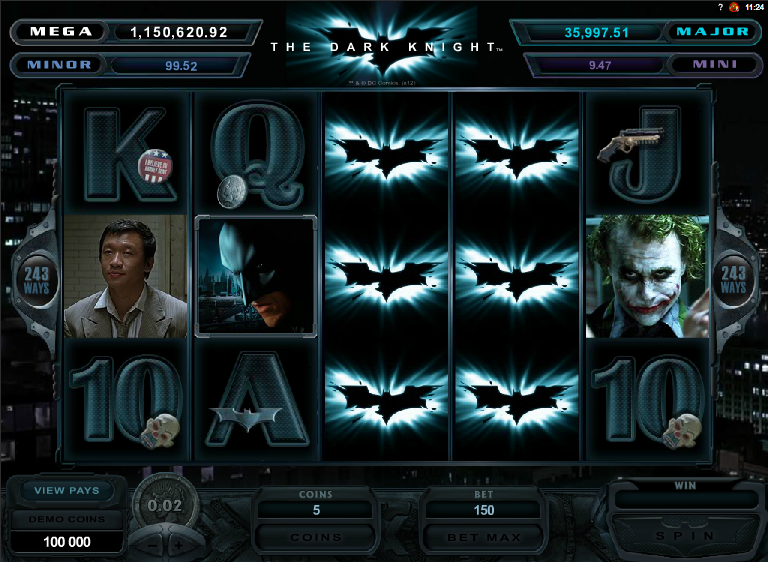 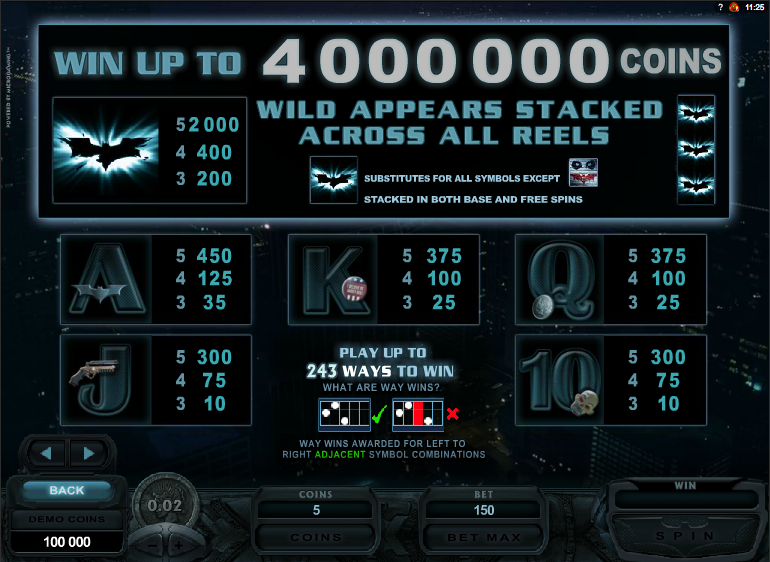 While DC Comics online slots may not be as numerous as Marvel slots, there are still plenty of good quality games out there featuring DC superheroes and we have one right here. This is The Dark Knight, it’s from Microgaming and it is of course themed on Batman, specifically the film of the same name. It’s also got several progressive jackpots so keep reading to find out more.

The Dark Knight is a five reel slot with 243 ways to win which means there are no paylines – you just have to land matching symbols adjacent to each other. The symbols are mainly characters from the film and while we won’t name them all here you will probably recognise Commissioner James Gordon, the Joker and Harvey Dent.

Special symbols here are the Joker’s graffiti symbol and the Batman logo wild. The wild is stacked which means those symbols can appear on top of each other to create more winning opportunities. The top prize of 4,000,000 coins is won by filling all reels up with stacked wilds.

Fifteen free spins can be yours and all you need to do is land three, four or five of the Joker graffiti scatter symbols anywhere on the reels. You will receive a 2x multiplier for any wins you land during this phase.

Unfortunately the spins can’t be re-triggered from within this round and it’s also not possible to win a shot at the progressive jackpot from here.

This is a randomly awarded prize which can occur at any time during the base game or free spins. A figure of either character will appear on the reels and you will receive an extra stacked wild or an extra multiplier for example.

This is another randomly awarded occurrence and when it happens you will see a wheel of fortune divided into coloured segments. Two arrows corresponding to the Batman and the Joker are placed on either side of the wheel so pick one.

Now just spin the wheel and hope that it stops on a nice big progressive jackpot. They are the Mega, the Major, the Minor and the Mini and you can see the current totals above the reels. For the Mega progressive, the least you will win is 1,000,000 coins.

There’s loads going on in this game and that’s always something to be commended. The cinematic clips, the sound effects and the graphics are top quality and the progressive jackpot is the icing on the cake.