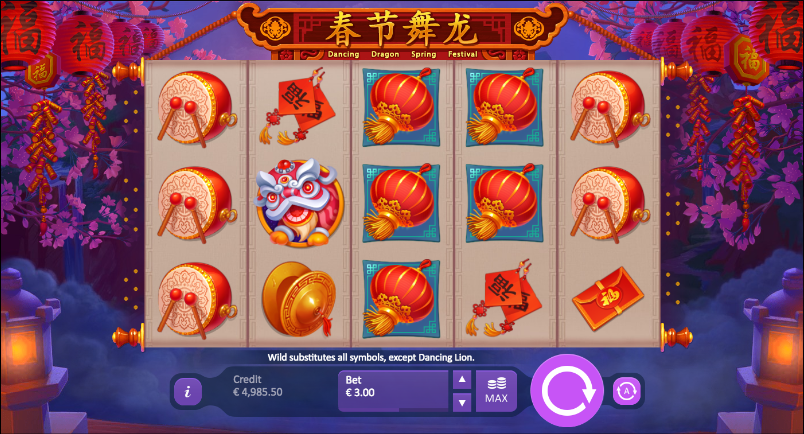 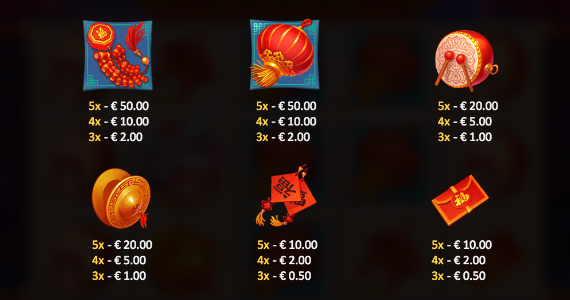 The spring festival in China is perhaps more commonly known as Chinese New Year outside that country and it’s the theme of this intricate online slot from Playson; it has a fairly length title – Dancing Dragon Spring Festival – and while it’s fairly light on bonus features, the graphics and soundtrack are the reasons to check it out.

Dancing Dragon Spring festival is a five reel slot with three rows and thirty fixed paylines; those reels spin on a roll of parchment  stretched between two polished rollers; the charming backdrop includes gently swaying lanterns in front of blossom trees and the action is all set in the grounds of a temple complex.

All the symbols are related to the theme and include the stylised dragon, some firecrackers, the Chinese lantern, a drum, a pair of cymbals, a kite and an envelope. Paylines can be formed anywhere on the reels – they don’t have to start from the left hand side.

The wild symbol is the Chinese gold coin, it appears only on reel three and it will substitute for all others to help make winning combinations except for the dancing lion scatter icon.

We’ve already suggested that there aren’t really any bonus features in Dancing Dragon and that is pretty much the case except for the Dragon symbol prize opportunity. All you have to do is cover every position with the dragon symbol and you’ll be rewarded with 5000x your total bet – not too shabby!

The attraction of Dancing Dragon Spring Festival is in the gameplay, the graphics and the sound effects which combine to provide a delightful slots experience based on this great seasonal festival. It comes with an RTP of 95.79% and is well worth checking out.