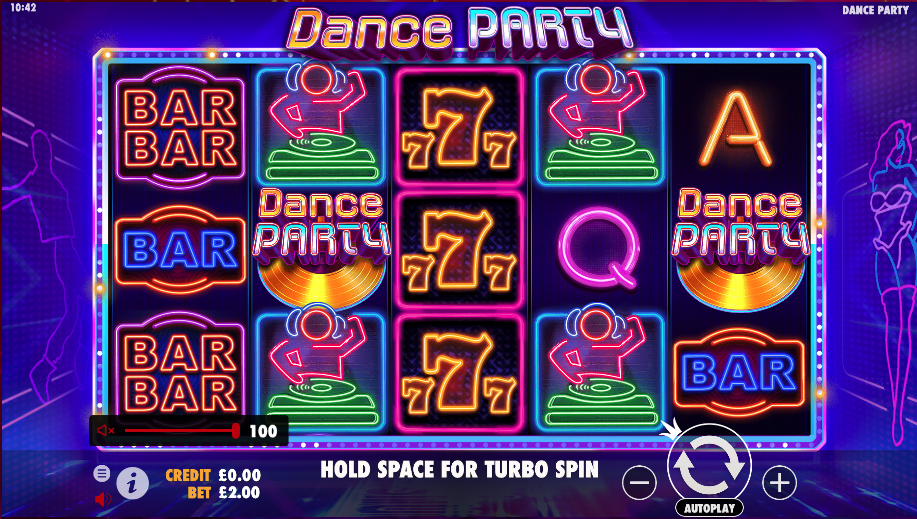 Coming to you straight from the neon-lit interior of a 1990s nightclub is this online slot machine called Dance Party; it’s developed by Pragmatic Play and it hides an extensive free spins round behind some groovy tunes.

Dance Party is a five reel slot with three rows and 243 way to win which means that there’s no payline structure and wins can be formed as long as there are matching in adjacent symbols on neighbouring reels starting from the left hand side.  All the action takes place on a brightly-lit set of reels with neon characters providing the backdrop.

The Dance Party logo is wild, it appears on reels two, three, four and five and it will replace all symbols except the glinting diamond to help form winning combinations.

Landing at least five of the diamond scatter symbols anywhere in view will award the following:

The starting multipliers are important because after each free spin the multiplier will increase again by 1x, 2x or 3x, depending on how many diamonds triggered the spins. Once the multiplier value reaches 30x it won’t go any higher.

Landing another five diamonds during this round will award an extra fifteen free spins up to a maximum of sixty.

Dance Party is an enjoyable and nostalgic trip back to a world of neon nightclubs and superstar DJs – not surprisingly you’ll find the biggest wins in the free spins round.