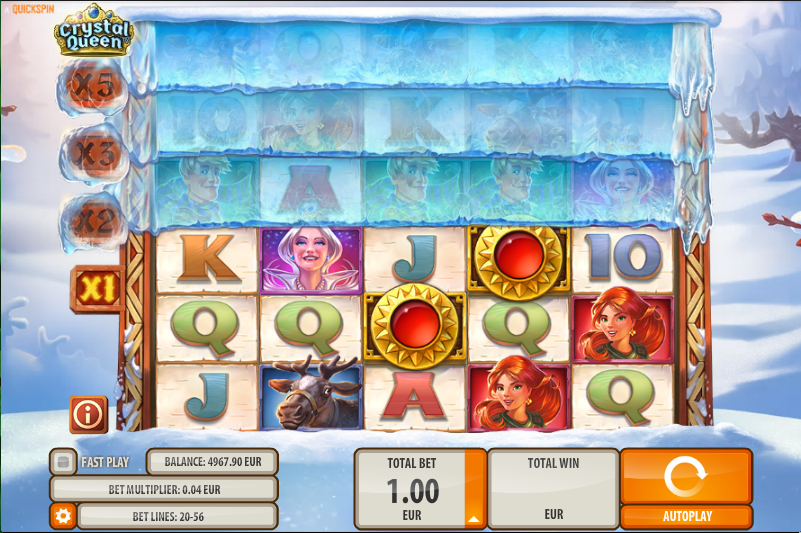 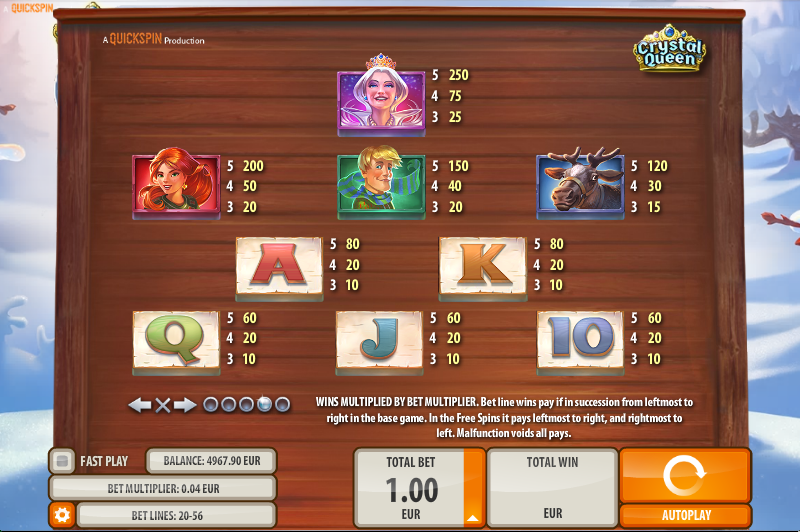 Sometimes an online slot hits the casinos which is so inventive that you just have to stand back and admire it; Crystal Queen is one such example and it might be the best game we’ve played all year. It’s developed by Quickspin and it includes some captivating gameplay along with several bonus features.

Crystal Queen is a five reel slot with three rows and twenty paylines initially; the game is set in some sort of winter landscape ruled over by the Crystal Queen and we are accompanied by a Disney-esque soundtrack which doesn’t intrude too much.

There are four high value symbols including the Crystal Queen, two younger characters and a reindeer; 10, J, Q, K and A make up the lower values.

There are two base game wild symbols – the Regular Wild and the Spreading Wild – and a scatter symbol represented by a red jewel set in gold.

During the base game the regular wild appears only on reels four and five; in the free spins it turns up on reels one, two, four and five.

The spreading wild is more interesting, appearing on reels one, two and three in the base game and two, three and four in the free spins. When it lands it will spread out to up to five adjacent reel positions.

This is perhaps the main focus of the game and you will notice that the three upper rows are frozen when you begin the game. When you land a winning combo those symbols involved will disappear, allowing more to fall into place and offering the opportunity for more wins. With each consecutive win one row is melted, increasing the number of paylines available and the multiplier for any new wins:

When there are no more wins the top three rows are frozen once more.

This triggered by landing three or more of the red jewel scatter symbols anywhere in view; you will be awarded ten free spins but with all six rows uncovered and 56 paylines active.

Additionally you can now win from right to left as well as left to right  and as you can see from the video above some big wins are available.

Crystal Queen is a superb game and there’s really nothing bad we can say about it; check out our gameplay videos and then dive straight in yourself – you won’t regret it!