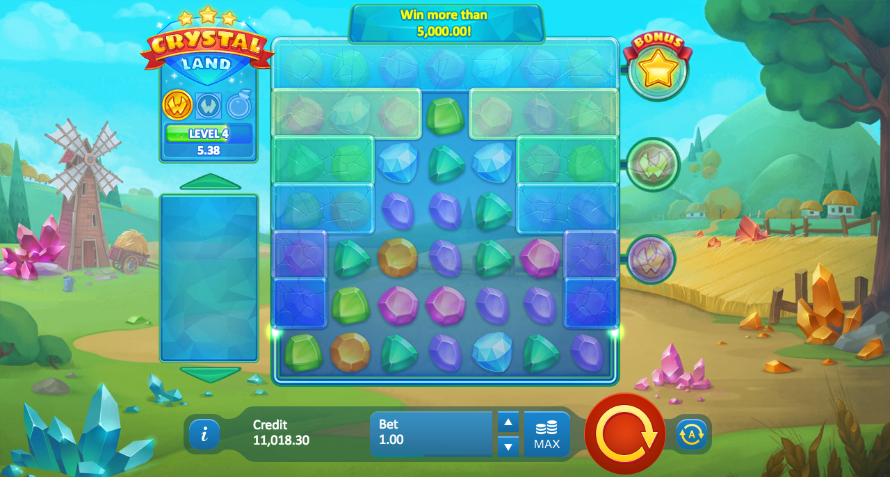 If you fancy a colourful diversion from the standard five reel online machine then why not check out this game from Playson; it’s called Crystal Land and it combines clever gameplay with achievable bonus features – keep reading to find out how it all works.

Crystal Land plays out on an 8 x 8 grid as you can see from the screenshot above but to begin with some of the positions are locked (we’ll come to that later); the backdrop displays some of the scenery of this place with crystals growing wild in front of mine shaft.

Six coloured crystals are the only standard symbols and they are blue, orange, pink, light green, dark green and purple.

There are two wild symbols – the wild and the ruby wild – and they both substitute for all others to help form winning combos.

Winning combos are formed by connecting at least five matching gems or wilds horizontally and/or vertically; those symbols involved will then disappear and more will fall down to replace them.

Each successive win will unlock the frozen layers one at a time, starting from the bottom; completing the third and fifth layers will add a random number of wilds to the reels and reaching the top will trigger the bonus feature.

Ruby wilds are created by landing a combo of at least six matching symbols and it will then transform into a bomb if it helps out with a win. Any bombs will explode when there are no more wins, either in a cross pattern one symbol wide or horizontally two symbols wide.

As we’ve already mentioned the bonus is triggered by unlocking the last layer at the top of the reels; three treasure chests of different sizes are now placed behind the symbols and your task is to clear them to uncover the chests.

Three vials of potion are added to the reels one by one, each transforming all gems of one colour into another to form wins; when those matches have completed the next vial is added and so on. Any chests uncovered are then worth cash prizes to the player with a 9x multiplier if all three are cleared. 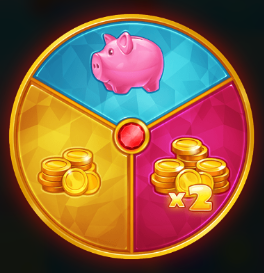 You may have noted the small meter underneath the Crystal Land title on the left hand side and this is slowly filled up y making matching combinations; as you work your way through the levels mini-features will randomly awarded during gameplay – extra wilds > ruby wilds > colour potions and then back to extra wilds again.

Completing a level will also award the prize shown underneath the meter but you have to spin a wheel first to determine whether the prize is awarded, multiplied by 2x or held over until the next level completion.

Crystal Land is a really engaging slot and it’s very easy to set the Autoplay running and watch the symbols collapse and disappear as they make matches; there’s always something extra going on and lots of ways to make some money so certainly give it a go. This game comes with an RTP of 95.20%.