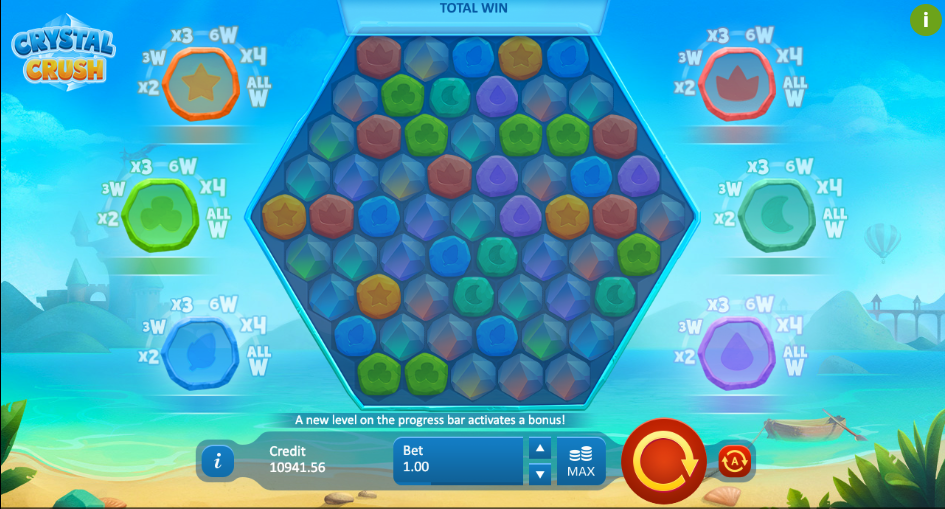 Sparkling gems in a fantasy land are the themes of this colourful online slot from Playson which is more of an arcade game than a traditional reel spinner; it’s called Crystal Crush and it offers a clever bonus feature along with disappearing symbols.

Crystal Crush plays out on a hexagon-shaped play area with space for sixty one crystals of assorted colours and wild symbols; the backdrop is an enticing vista of a blue lake with fairytale castles, bridges and hot air balloons in the distance.

The gameplay involves all the symbols dropping in from above with any five adjacent matching ones disappearing to make space for more falling in from above. We’ll explain how these matches relate to the main feature a bit further down.

There are six crystals in orange, red, green, turquoise, blue and purple along with ‘crystallized symbols’ which can not be part of a winning combo. The wild ‘W’ will substitute for all crystals to help form winning matches.

Each time you land a winning combination any crystallized symbols touching it will partially fill up the meter of the corresponding colour around the outside; every third crystallized symbol will reach the next bonus level on that particular colour:

This can occur randomly on any non-winning spin and it triggers two levels of one particular  colour meter.

We’re fans of games like these as they offer something a little different to the norm; collapsing reels and a clever bonus feature keep things interesting and there’s plenty of playability here.