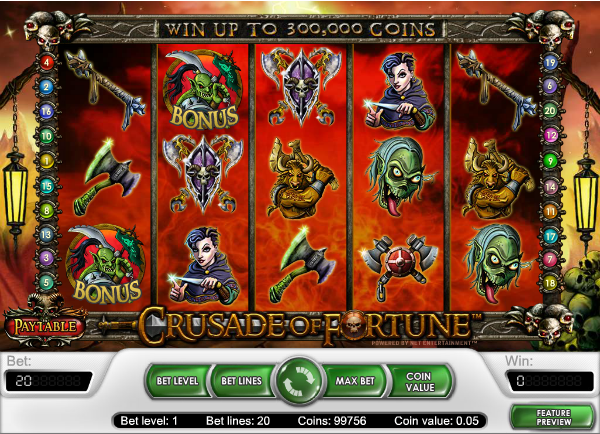 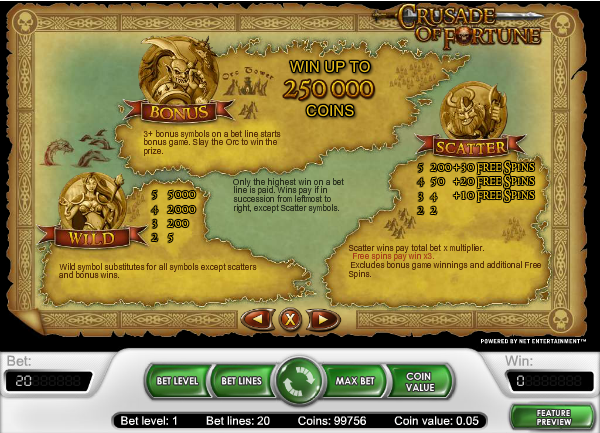 Horror and violence returns to the reels in this action packed online slot machines from Net Entertainment; Crusade of Fortune hails from the same fantasy genre as Lord of the Rings and it’s populated by some fearsome-looking characters. Two separate bonus features add to the fun and there’s a really atmospheric soundtrack.

Crusade of Fortune looks great and it takes place over twenty paylines and five reels; there’s a nightmarish background of fire, desolate mountains and skulls and an ornate but grim frame holding the reels.

Weapons such as axes and maces make up the lower value symbols and a range of characters from the game are the higher value ones.  The wild is represented by a foxy female elf, the scatter symbol is not-so-foxy dwarf and there’s a bonus symbol featuring a dangerous-looking orc.

You’ll have to land three or more bonus symbols on an active payline to trigger this feature; you’ll then be taken to a screen where your heroine is facing off against a big orc in front of the tower.  You will have three chances to pick an attack (low, middle or high) and three chances to defend yourself in similar positions.

Prizes are awarded depending on how successful your attacks and defences are and killing the orc will win you the biggest prize.

Everyone likes some free spins and you can earn yourself some here by landing three or more of the dwarf scatter symbols anywhere on the reels.

During this feature any prizes will tripled and it’s also possible to win more spins by landing more scatter symbols.

While you’ll be able to trigger the free spins by playing low stakes and minimum paylines, you’ll need to play more lines if you want to trigger the Orc Tower game – the symbols which trigger that need to be landed on an active payline.

This game matches the usual high quality of Net Ent slots in terms of graphics and gameplay and there’s a great soundtrack to keep you company as well.  Well worth checking out.