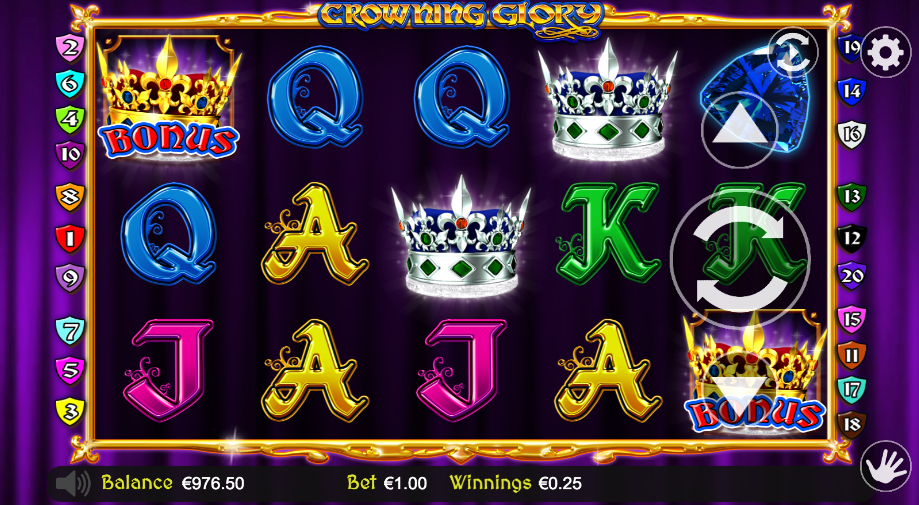 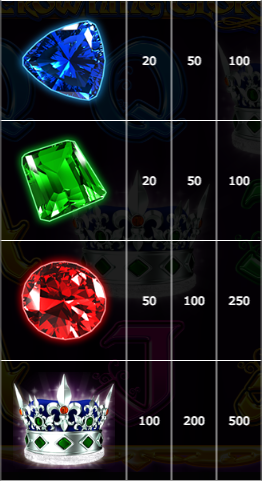 Gems and gold are a common staple of online slot machines and that’s because they offer a glimpse of the type of things you could buy and the kind of life we could lead if only that jackpot would land; Crowning Glory is another such game, it’s developed by betdigital and you can find out the scale of royal rewards available below.

Crowning Glory is a five reel slot with three rows and twenty fixed paylines; a golden frame borders those reels and the gameplay takes place against a lush purple backdrop which could be described as regal in anyone’s book.

The high value symbols include a jewel-encrusted silver crown and red, green and blue gems; the standard 10, J, Q, K and A represent the lower values. Any of the standard symbols can appears as giant, 3×3 or 2×2 ones on the reels.

There is no wild symbol in Crowning Glory but there is a bonus symbol represented by an ornate golden crown which appears on reels one, three and five.

This is the main extra feature and it’s triggered by landing three of the golden crown scatter symbols anywhere on reels one, three and five; you can’t retrigger the round from within this feature but each scatter which lands will award one extra spin.

This is a Wheel of Fortune which can be randomly awarded on any spin and you will see the wheel appear on the screen and spin to reveal one of the ten symbols; that icon is transferred onto the reels to award a five symbol win. In addition twelve free spins can be triggered from here if the scatter symbol is selected.

Crowning Glory is a little on the basic side but it’s colourful, bold and fast moving and those giant gems catch the eye as they spin on the reels; there are also plenty of medieval sound effects to enjoy and an RTP of 96.41%.