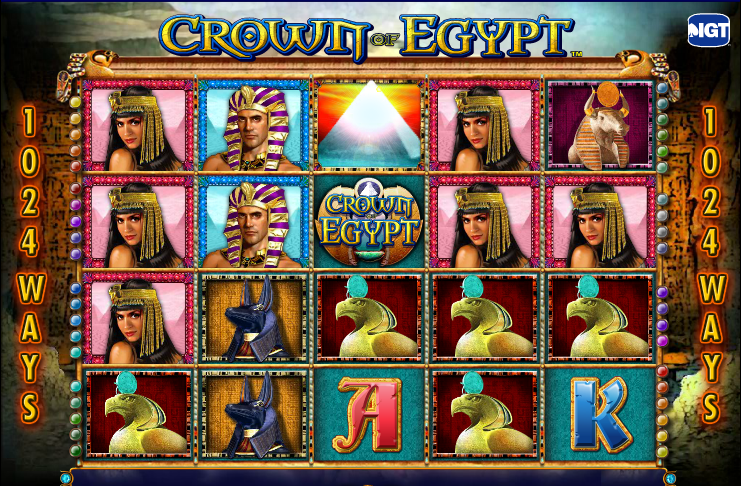 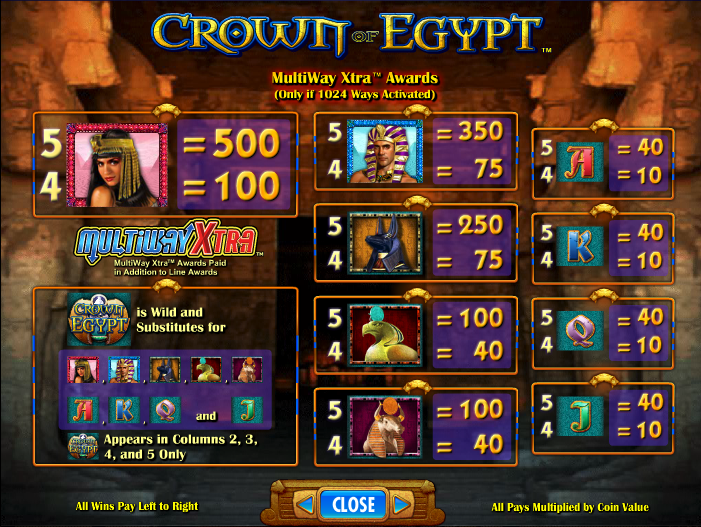 There’s no shortage of Egyptian-themed online slot machines and we’ve reviewed a fair few in the past on this website; Egypt allows the slots developers to involve various gods and other characters as well as the pyramids, the Sphinx and the like.

Crown Of Egypt is from the capable studio of IGT and it’s a worthwhile addition to the Egyptian genre – it features five reels, 1024 ways to win and some lovely graphics.  The soundtrack also adds to the experience and the reels are set against a background of hieroglyphics which add to the Egyptian atmosphere.

The major symbols include images of Egyptians gods such as Ra and Anubis; there’s also a Pharaoh, a female Pharaoh while the minor symbols are represented by J, Q, K and A.

Special symbols are a ‘Crown of Egypt’ wild which appears on reels two, three, four and five and a spectacular translucent pyramid which activates the bonus round.

This feature is IGT’s way of spicing up the paylines a little; to activate it you’ll have to be playing with 40 lines and then you need to click the ‘+’ button in the bottom left hand corner of the screen.  Your stake will be doubled but we think t’s worth it.

You can now win not just on standard paylines but also if matching symbols are on adjacent lines – although it costs more you should also win more.

There’s some free spins available in Crown of Egypt and the only way to trigger them is to land two or more of the pyramid symbols on the centre reel.  This is not quite as difficult as it sounds because this slot features four rows of reels rather than the usual three so there’s more scope for free spin success!

The reels used in the free spin round are more valuable than in the base game and you can check the symbol values by on the payable.  It’s also possible to re-trigger this feature by landing more pyramids although there’s a maximum of 130.

Crown of Egypt is a worthy addition to the burgeoning ranks of Egyptian-flavoured slots and the Multiway Xtra and free spins round mean this is a useful use of your spare time.