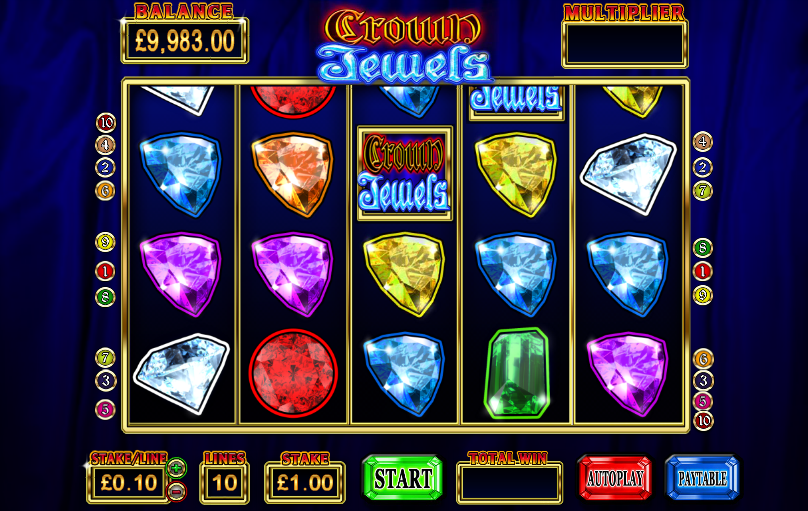 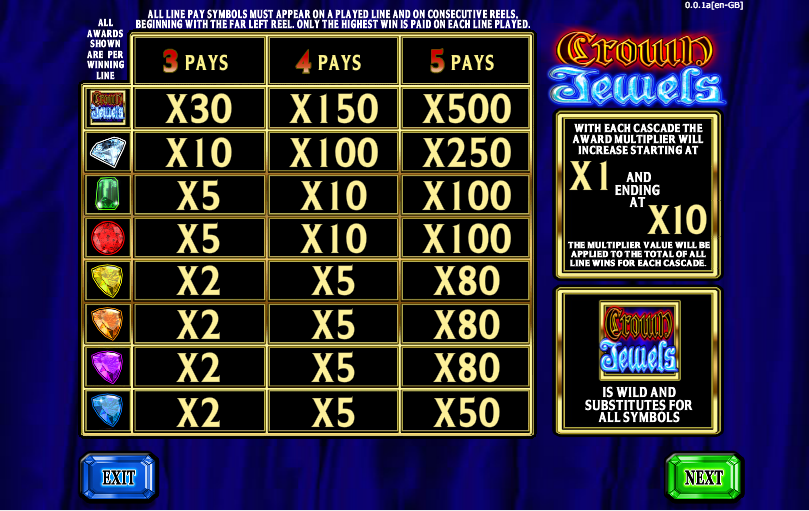 Some online slots don’t need a raft of bonus features or 3D animations to be an enjoyable gaming experience and that’s the case with a game such as Crown Jewels. It’s developed by Barcrest and at first glance it may seem a little on the basic side; play for a while however and it’s a strangely addictive jewel-themed affair which almost demands you keep spinning the reels – check out our review below for all the essential details.

Crown Jewels is a five reel slot with three rows and just ten paylines; Barcrest fans will notice a familiar look to the design – the reels with their large symbols take up all the available space and they are placed against a backdrop of crushed blue material; it all looks very posh.

All the symbols are related to theme and almost all of them are jewels which we can differentiate by colour from high to low value – clear, green, red, yellow, orange, purple and blue.

The games’ Crown Jewels logo is wild and is will substitute for all other symbols.

Those looking for bonus features here may or may not be disappointed to know that there is just the one and it’s a base game extra known variously as ‘cascading symbols’, ‘exploding symbols’ or ‘rolling reels’.

Essentially each time you land a winning combo in the base game, those symbols will disappear after the payout to be replaced by more falling in from above; this new arrangement can then form more combos and this process continues until there are no more wins to be found.

Additionally, each successive combo increases the multiplier for that win by 1x, up to a maximum of 10x. There are only ten paylines and so this won’t happen as often as you would like but it can be lucrative for the luckiest players.

As we said at the beginning, Crown Jewels is oddly addictive because of the cascading symbols feature and the best thing to do is set the autoplay, sit back and watch the action. It’s good stuff and comes with an RTP of 95.00%.