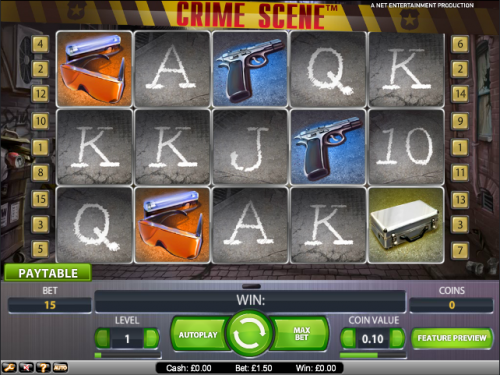 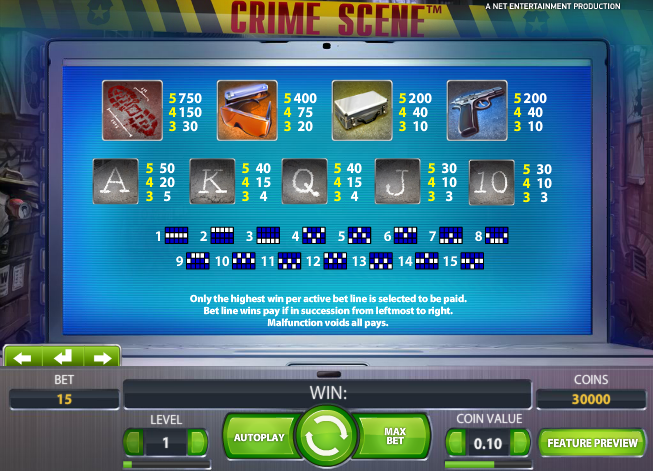 We’ve seen a fair few online slots based on crime, criminals and the police in general but there’s always room for one more. Crime Scene from Net Entertainment differs from these other games in that it concentrates on the aftermath of the event and the forensic side of things, something that should appeal to fans of television shows such as CSI.

It’s a five reel and fifteen payline slot which includes a funky bonus game; the reels are set against the background of a grimy alleyway and police tape and the lower value symbols are represented by playing card symbols.  Higher values are all them-related so we have a gun, a metal case, UV spectacles and a suspicious-looking footprint.

The bonus symbol which triggers the bonus game is a set of fingerprints and the wild is a police badge.

Landing three of the fingerprint symbols in the main game will win you a shot at the bonus game and it all takes place inside a computer screen.  Check the video below to see it in action.

You will be presented with a screen containing thirty folders; one by one you can click on these folders to reveal cash prizes until you have uncovered three red cross symbols.  You may uncover other symbols along the way as follows:

The wild symbol is active in standard gameplay and when it lands it will remain in place for between one and five spins; this gives you the opportunity to land extra wilds on subsequent spins to try and get more winning combos.  If you make a combo with a sticky wild it will pay at a multiplier of 3x.

Crime Scene contains all the ingredients of an enjoyable online slot and the bonus game in particular is innovative. It’s polished and looks as good as you would expect from Net Entertainment.