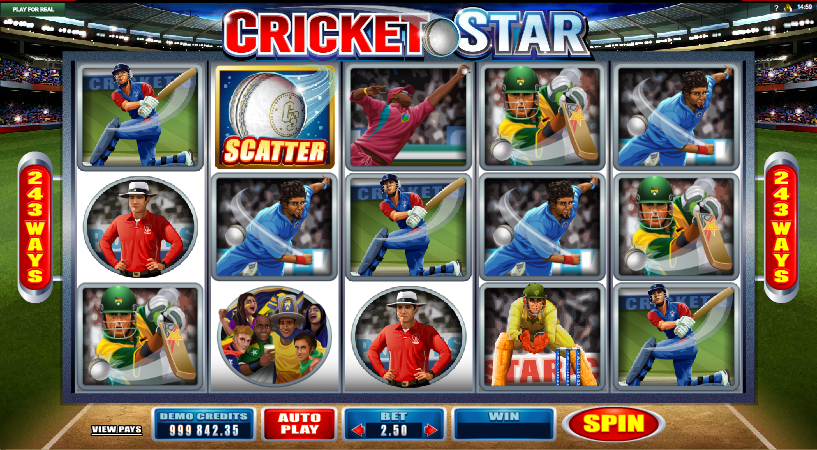 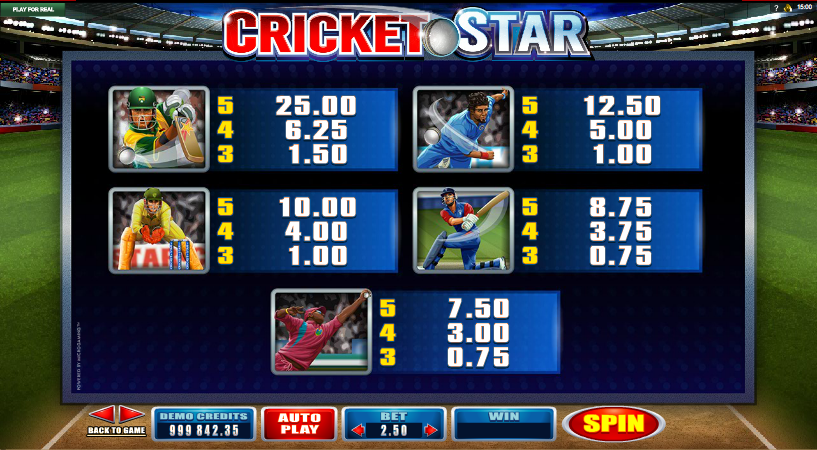 Even in that relatively small number of countries where cricket is played regularly it can still be a game one loves or hates. Matches that last five days and incomprehensible rules make it the Marmite of sport. Still that hasn’t stopped Microgaming designing an online slot based on this very game; it’s called Cricket Star and it’s packed with extra features so read on to find out more.

Cricket Star is a five reel slot with three rows and 243 ways to win – this means there’s no payline structure and winning combos are made just by having matching symbols in adjacent reels from left to right. The backdrop to the reels is a huge cricket stadium full of slightly bored fans wishing they’d gone to the football instead.

The symbols are an entertaining bunch of cricket-related icons including players from some of the leading cricket nations, an umpire, a group of fans and some celebrating players.

The Cricket Star logo is wild and stacked on reels three, four and five while the scatter is represented by a cricket ball which activates the main feature.

When you land a win those symbols involved will disappear, allowing more to fall into their place. In this manner it’s possible for lucky players to make sequences of wins for bigger payouts.

Randomly three wickets will appear on top of reels two, three and four and a ball will be bowled towards them; the wicket it hits will turn that particular reel completely wild and guarantees a win.

Landing three, four or five of the cricket ball scatter symbols anywhere in view will reward you with the following:

The Rolling Reels are also active during the spins and each consecutive win you land using them will increase the multiplier for that spin up to a maximum of 10x. Unfortunately the spins can not be re-triggered from within this feature.

Whether you like cricket or not this is definitely a slot to check out – we especially like the Rolling Reels but there are lots of other features to keep things ticking along and a decent soundtrack.