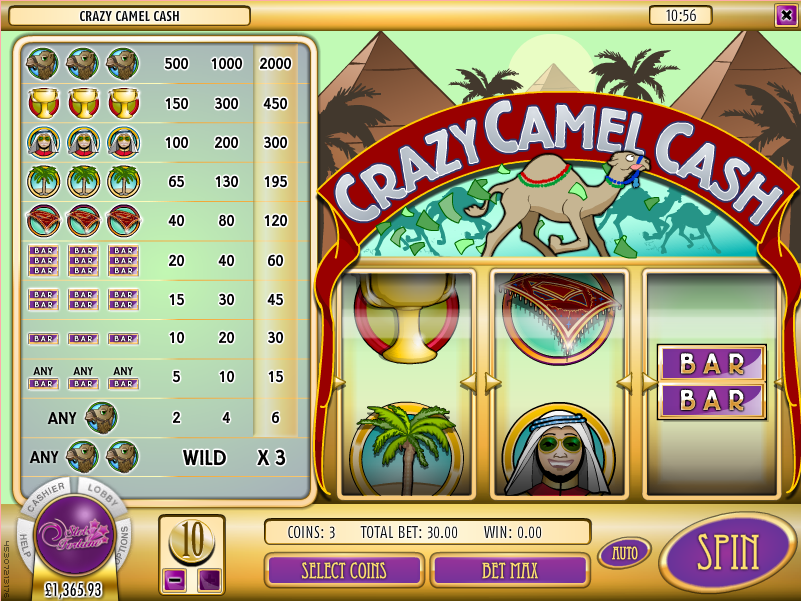 Camel racing is not something which concerns most of us as we go about our daily lives but there’s nothing wrong with introducing a little cultural diversity into our gaming time. Crazy Camel Cash is an online slot machine from Rival Gaming which keeps things simple, lacking any bonus features. It may be the first camel-themed game we’ve played but is it any good? Read on to find out.

Crazy Camel Cash is a three reel slot with just one payline and all the action takes place against a backdrop of pyramids and palm trees. In the foreground a camel cavorts under a shower of bank notes.

The symbols are a mixture of traditional and themed and include single, double and triple bars, a magic carpet, a palm tree, a cheerful Sheikh, a gold trophy and the camel himself. Three mixed bars on the payline will payout 5x your stake.

That camel also represents the wild symbol which will substitute for any other icon to complete a winning combo. It’s also a sort of scatter symbol and will payout for one or two anywhere on the payline.

That multi-purpose camel is also the highest value symbol and worth 2000x your stake for three on the payline.

Kick things off by selecting your stake and your coin level – this will give you a betting range of between £0.01 and £30.00. Now just press the ‘Spin’ button to get your gaming underway and hopefully win some money.

There’s a built-in incentive to bet at the three coin level because although your betting increases by 3x compared to one coin, the top camel payout increases by 4x. If you can afford it, it’s worth the extra spend.

Crazy Camel Cash lacks the bonus features of many Rival Gaming three reel slots but that’s not always a bad thing – there’s clearly an audience for these simpler games. There’s an RTP of 94.99%.