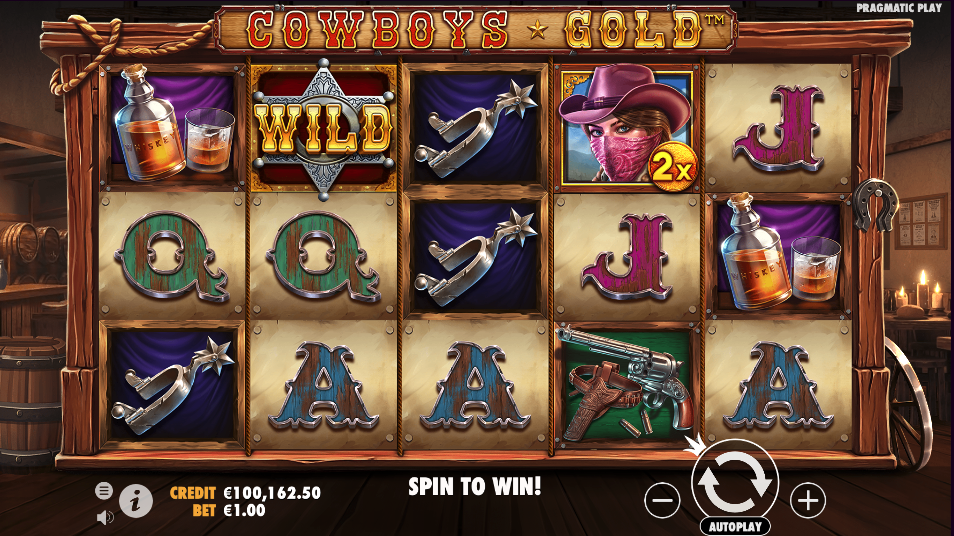 We’re saddling up and heading out the to Old West now to check out this online slot from Pragmatic Play – it’s called Cowboys Gold and from £0.20 per spin it tempts players with free spins, instant cash prizes and cowboy-related payouts.

Cowboys Gold is a five reel slot with three rows and ten fixed paylines; the setting is the interior of a saloon bar with barrels of alcohol stacked behind the bar and candles lighting the gloomy interior.

The theme-related symbols include the Golden Horseshoe, the silver spurs, the bottle of whisky and the pistol; J, Q, K and A are the lower values. There are also seven cowboy characters, a Sheriff’s badge wild symbol and a skull bonus icon.

Each of the seven cowboys can land with a multiplier value of up to 100x overlaid on their particular face and if the masked renegade symbol appears on reel five in the same spin you’ll receive the total of all those multipliers applied to your total stake.

This is triggered by landing at least three skull bonus symbols or at least one skull and a renegade on reel five; you’ll receive ten free spins initially but this can be retriggered three more times, adding five more spins.

The Renegade feature is also active during this round so you can keep collecting those cowboy multipliers but here there’s an extra attraction – the total multiplier for the round increases with each retrigger:

Cowboys Gold is an action packed slot which offers plenty of chances to trigger the features and plenty of Renegade wins in the base game – it’s an entertaining addition to the large posse of Wild West-themed games available and it also has a nice, high RTP of 96.50%