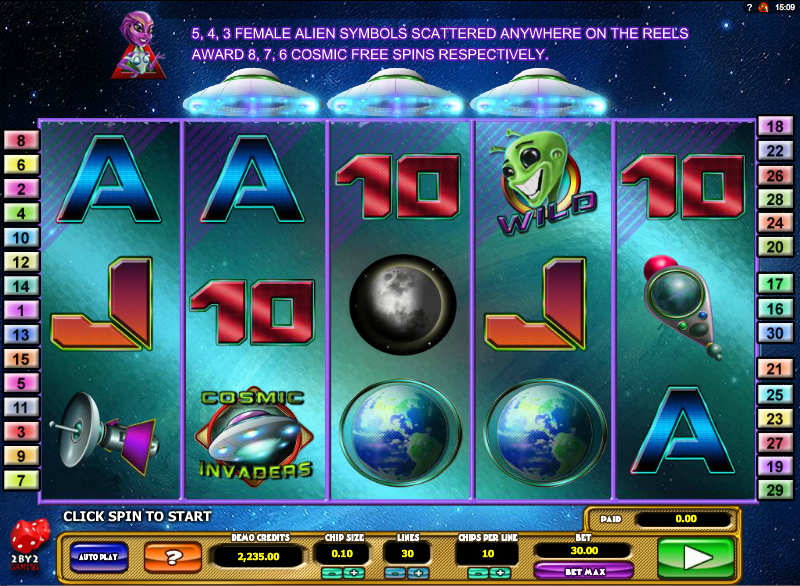 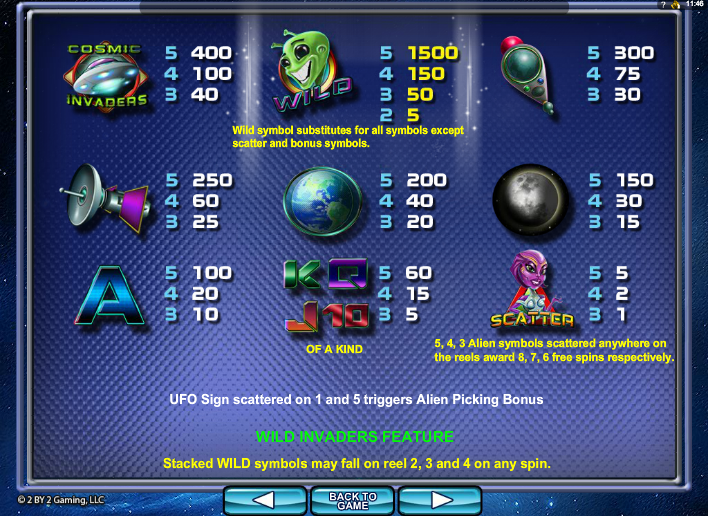 2by2 Gaming are a relatively small software company who produce some simple but enjoyable online slots. Cosmic Invaders is an example of what we are talking about – a sci-fi themed game without state of the art graphics but with a cheerful gleam in it’s eye and several bonus features. Read on to find out more.

Cosmic Invaders plays out over five reels and thirty paylines and those reels are set against the backdrop of the vast infinity of space. Threatening UFOs loiter above the reels while a quirky sci-fi soundtrack accompanies the gameplay.

Aside from the standard 10, J, Q, K and A symbols we have views of the moon and the earth through spaceship windows, an alien weapon, some sort of alien instrument and then a Cosmic Invaders logo which is the most valuable basic symbol.

The wild symbol is a grinning green alien and there’s a female alien scatter symbol which is the key to the main feature. There’s also a yellow UFO sign which triggers a minor feature.

Watch out for the spaceship above the reels because on any spin they can randomly fly downwards, dropping wild symbols as they go. A whole wild reel is obviously the aim and when this is done, any prizes will be re-evaluated.

If you can land the yellow sign scatter symbol anywhere on reels one and five you will trigger this mini-game. You will a  new screen with five aliens and all you do is choose one for a cash prize. If you’re really lucky it may also give you an extra pick.

Three, four or five of the female alien scatter symbols anywhere on the reels will reward you with six, seven or eight free spins respectively. As an added extra, one of reels two, three or four will be completely wild.

The feature cannot be re-triggered but you can win the Alien Pick bonus from here.

Both of the features are triggered by scatter symbols so you can play with just one payline if you like and still have the same chance of winning the Cosmic Spins or the Alien Pick.

Despite it’s slightly basic graphics, this is an excellent slot with lots going on and a funky soundtrack. It’s well worth checking out.