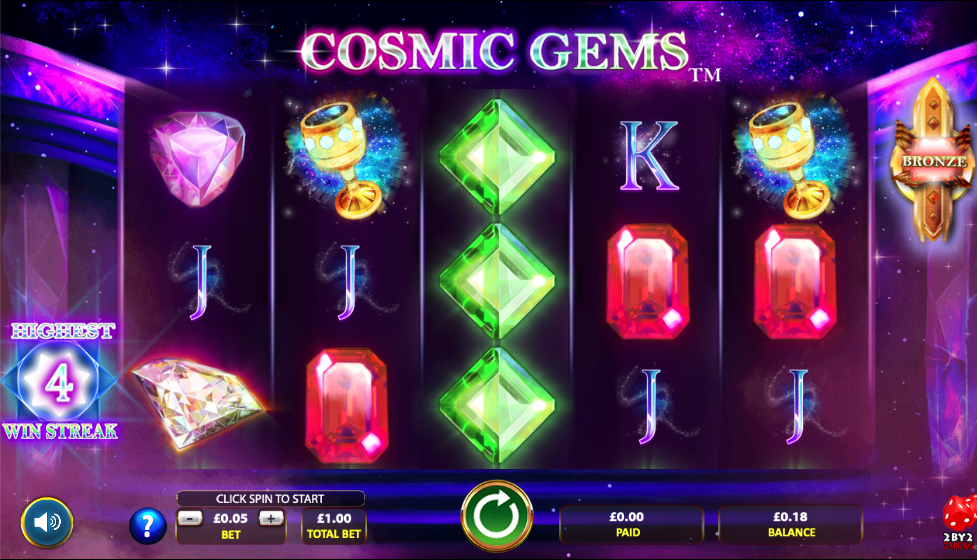 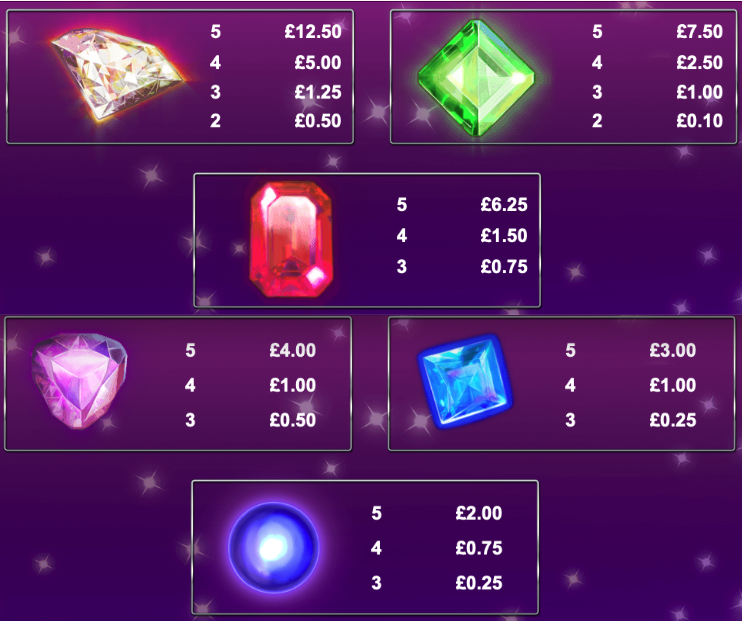 The twin themes of science fiction and expensive jewellery come together now in this online slot from 2By2 Gaming; it’s called Cosmic Gems and from £0.20 per spin it gives players the chance to win free spins, respins and unlock achievement trophies.

Cosmic Gems is a five reel slot with three rows and 243 ways to win; blue and purple universes in the background contain sparkling stars which light up those reels, spinning between two hazy purple structures,

Glittering gems in white, green, red, purple and blue make up the higher values, along with a blue and white orb; 10, J, Q, K and A represent the lower values. The gold corn is wild and it appears on reels two, three and four while the golden cup is the scatter symbol.

Any win except a scatter win will trigger this feature and you’ll receive one respin with the reels increased to four rows and 1024 ways to win; respins will now continue until there are no more wins and it’s here that trophies will be awarded for achieving certain numbers of wins in a row:

Note that there’s no monetary benefit to these trophies (apart from the wins on the streak) but various badges will be unlocked and the look of the game will also change as you unlock the levels.

Landing three, four or five of the golden cup scatter symbols anywhere in view will award 8, 10 or 15 free spins respectively; during this round the game adds an extra row to offer 1024 paylines and any win streak wins are doubled. More spins can be retriggered in the same manner.

Trophy collections are a strange thing – we want to achieve those goals while knowing that doing so doesn’t really offer anything; still, any sort of creativity is welcome and when you factor in the free spins it all adds up to an enjoyable slot.

Cosmic Gems is a gem-themed five reel slot with three rows and 243 paylines.

Yes! A free spins round with a 2x multiplier plus trophy achievements earned through Win Streak respins.

The Return To Player percentage for Diamond Blast Zone is 96.02%.

Where can I play Cosmic Gems?