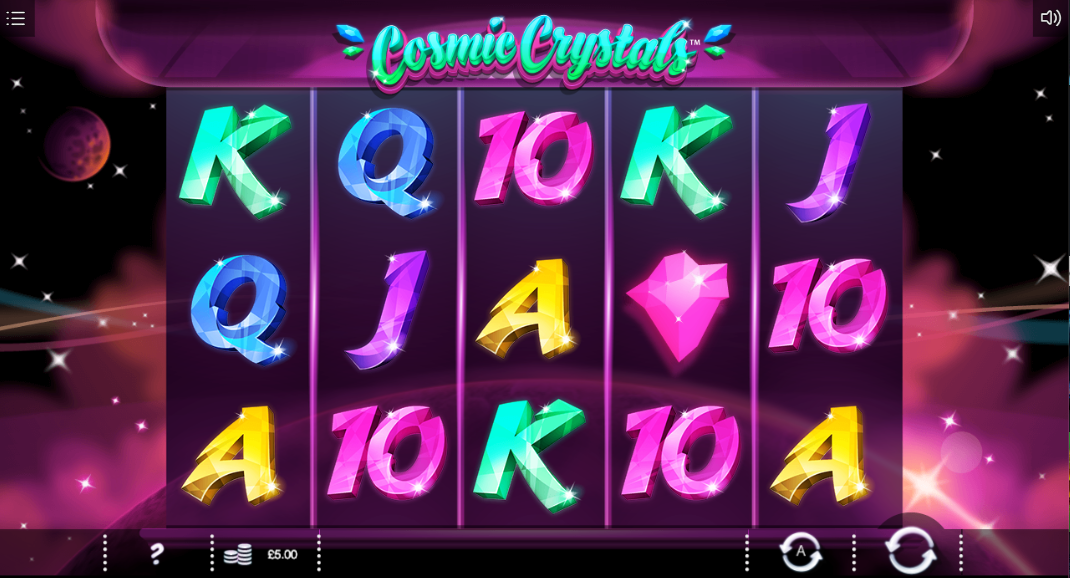 The twin themes of science fiction and pretty stones from the basis of this online slot from Iron Dog Studios – it’s called Cosmic Crystals and it comes with two clever bonus features.

Cosmic Crystals is a five reel slot with three rows and fifty fixed paylines; all the action is set in the depths of space where a pinkish planetary haze sets the scene for the reel-spinning action.

Appropriately, five crystals in pin, purple, blue, green and yellow represent the high value symbols while 10, J, Q, K and A make up the lower values.

The wild is a golden crystal which will replace all other symbols to help form winning combinations – there are no bonus or scatter symbols in Cosmic Crystals.

The wild symbols appear only on reels two, three and four in Cosmic Crystals but when they do they will expand to fill the whole reel. This should help out with some extra wins for the luckier players.

This is a feature we don’t see too often and it awards a free respin on every non-winning spin; in fact those reels will keep spinning until a win is achieved and this is made easier because any wilds which land on reels two, three or four will lock in place until that win, also expanding to fill their entire reel as with the Wild Reels feature.

Cosmic Crystals is a slot which doesn’t offer the standard bonus features but the Non-Win Respin makes up for that and awards the player guaranteed (small) wins on every paid spin. It’s fun, sparkly and worth some of your time.