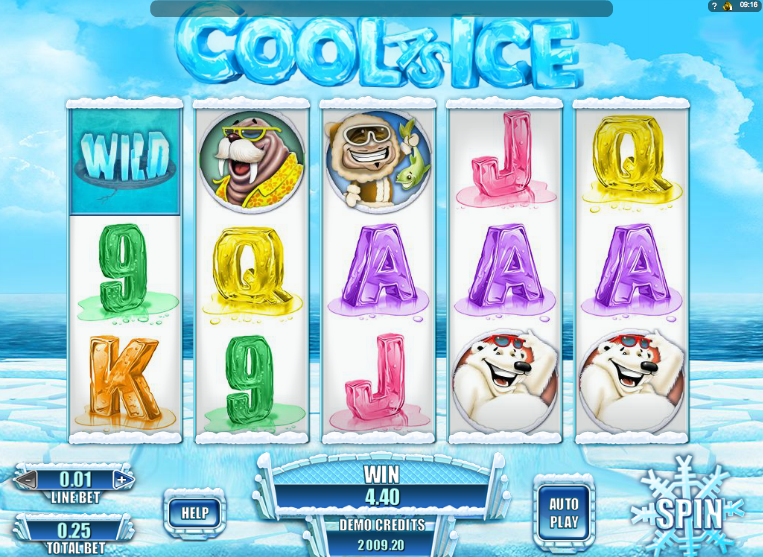 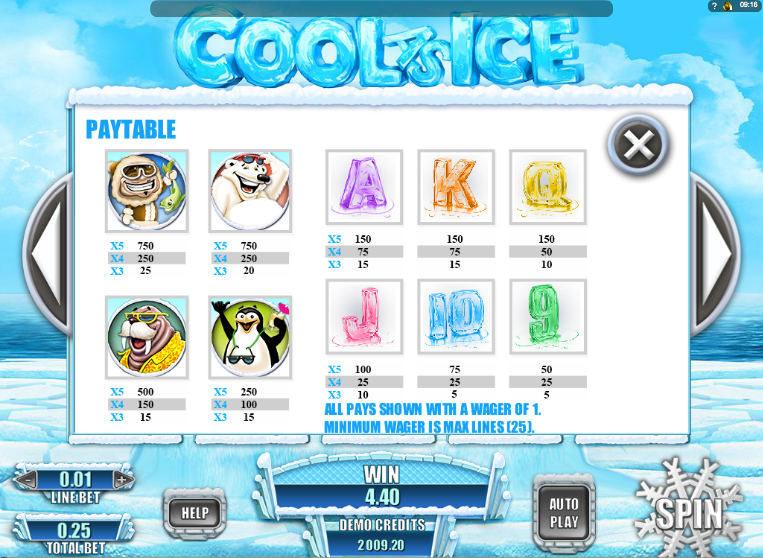 Way up to the north where the icy blue sky meets the frozen sea lives a community of animals and eskimos who spend their days donning a variety of sunglasses. That’s because their all Cool As Ice which is also the name of this chilly online slot from Genesis Gaming. Frosty features abound here so read on to find out more.

Cool As Ice is a five reel slot with three rows and twenty five fixed paylines. An arctic landscape of ice and water forms the backdrop to the snow-capped reels and there’s a twinkly aural accompaniment to your gameplay.

The four high paying symbols are characters from this location – a penguin, a walrus, a polar bear and an eskimo while 9, 10, J, Q, K and A make up the remainder.

A fishing hole in the ice is wild, the iceberg is a special wild and there’s a frozen icon which hides it’s own surprise. Bonus symbols include the Cool As Ice scatter, the husky dog and the sled.

This appears only on reel three and will expand to fill the entire reel when it lands. It may also spread to reels two, four or both, giving the player some extra opportunities for big wins.

This icy symbol can appear on reels two and four; when it does an eskimo will wander across the reels and break it, revealing a symbol which will hopefully make a match or even a cash prize.

This feature is triggered by landing the husky dog symbol on reel one and the sled on the same row on reel five. Three dogs/sleds will now race across the rows, leaving randomly positioned wilds in their wake. The reels will be reevaluated for wins when the race has ended.

The spins are triggered by three Cool As Ice scatter symbols which appear only on reels two, three or four. You will be taken inside an igloo where you must pick from the sunglasses on offer, each of which offers a number of free spins or multipliers.

When you hit the ‘Collect’ pair you will be given four more spins and those spins will begin.

We always like a slot with lots going on and that’s what we’re given here; several bonus features including some which occur regularly in the base game. Definitely worth checking out.