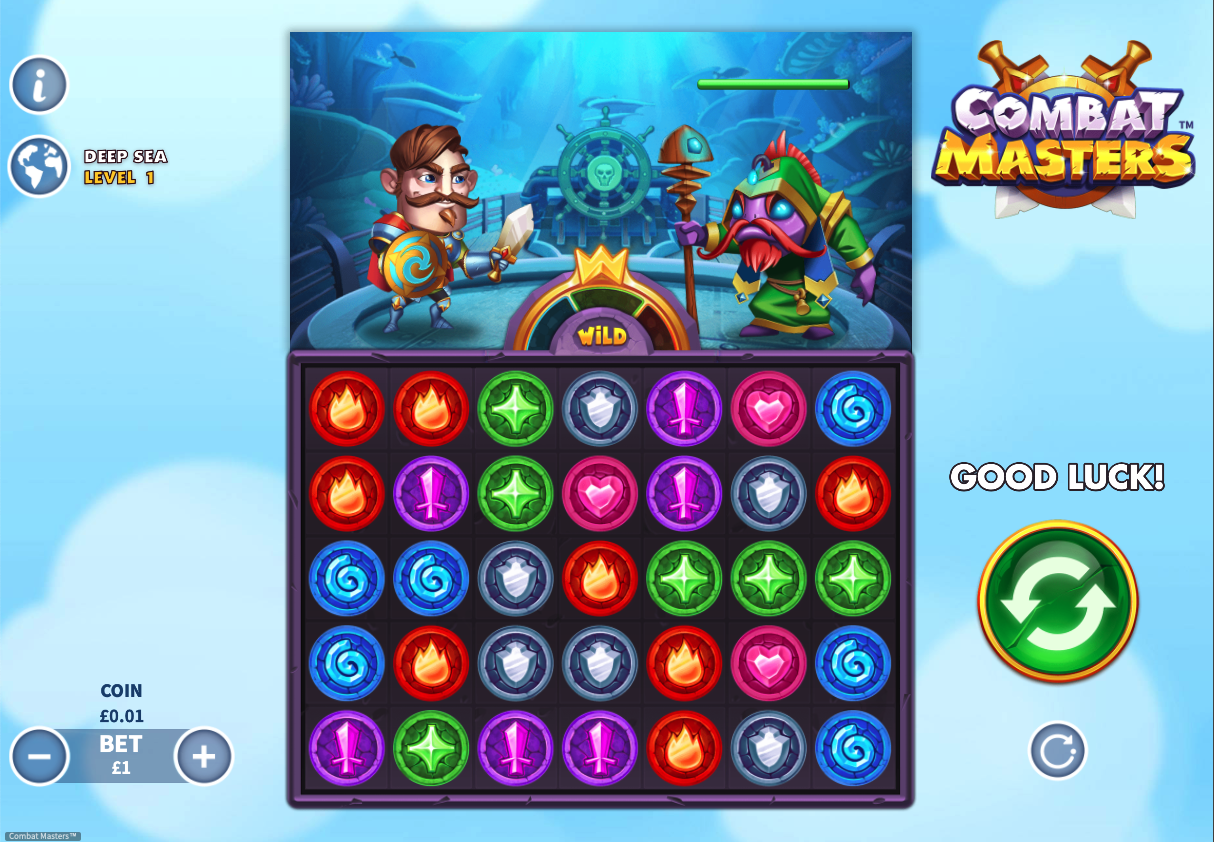 Fancy trying something a little different? Then cast your eyes over Combat Master, this online slot from Skywind which gives players the chance to progress through eight different worlds and overcome numerous enemies in the process. Cluster gameplay mechanics combine with picking bonuses and multiple base game modifiers from £1.00 per spin.

Combat Master plays out on the 7 x 5 grid you can see above and wins are formed by creating clusters of at least five matching symbols connected horizontally or vertically – they’ll then disappear and be replaced by more falling in from above to potentially continue the process.

Above the gameplay area our hero stands to the left, ready to do battle with whichever opponent is facing him.

The little meter above the reels records the number of winning symbols in any particular spin and reaching a certain threshold will add wild symbols to the reels:

When there are no more wins the meter resets back to zero again.

There are eight different worlds through which to progress in Combat Masters and seven opponents to defeat in each one; each winning spin will allow the hero to attack the opponent and degrade their health but each non-winning spin may mean a counter-attack which will replenish their health slightly. Defeating an opponent will bring on the next one and beating seven will mean we progress to the next world.

The worlds are listed below in order and reaching one will unlock a power-up which can trigger at random from that point on:

Once all worlds have been completed you’ll start again from Deep Sea and this is the way to trigger the Hot Lava Ball in Polaris which only strikes from the second visit.

There are nineteen opponents to face over the eight worlds and they get harder to defeat as you progress. The weakest are Qimir, Sizza, Kerak, Wolan, Amann and Omzo; slightly stronger are Turios, Krast, Warlock, Dukallis, Min-Ho, Alelada and Billy Gun. The strongest are Kvan Chi, Bixle, Dromm, Jomaori and Goblin.

Combat Master is really entertaining stuff and it comes with lots of things we like including cascading symbols, world progression and plenty of random bonus features; the constant battle going on above the reels is just another attractive feature of this game.

Combat Master is a fantasy-themed video slot from Skywind with a cluster gameplay mechanic.

Yes! World progression with numerous opponents and power-ups plus the Wild Power feature.

The Return To Player percentage for Sticky Bandits: Most Wanted is 96.07%.

How To Win On Combat Master?

Land at least five matching symbols or wilds on the grid connected horizontally and/or vertically. Trigger one of the features.

Where can I play Combat Master?