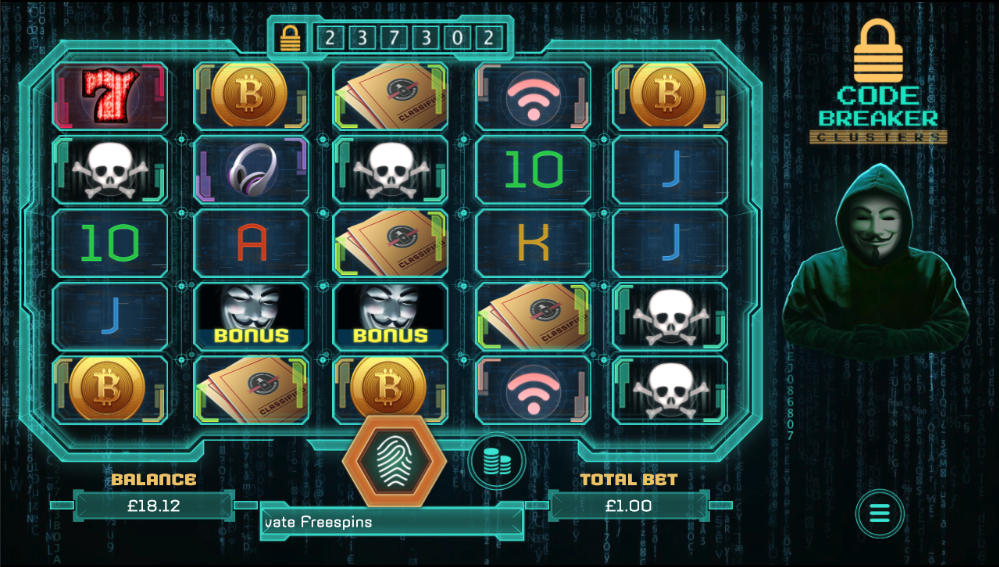 The world of hi-tech espionage and sets the scene for this online slot from BB Games with a masked character straight from the film V for Vendetta; it’s called Code Breaker Clusters and from £0.10 per spin it offers players Mystery Symbols, the Lock & Spin round and free spins.

Code Breaker Clusters plays out on the setup you can see above and your aim is to land clusters of at least six matching symbols which are connected horizontally and/or vertically; Matrix-like graphics surround the reel set while the thumbprint below is the key to spinning them.

The higher value symbols include headphones, a Wi-Fi logo, the skull and crossbones, some secret documents, red sevens and a Bitcoin; 10, J, Q, K and A make up the lower values. There’s no wild symbol in this game but the Vendetta mask is the bonus symbol.

Every time a winning cluster is formed those symbols lock in place and the other positions spin – any symbols adding to that cluster (or any new clusters) will continue this process and the win will paid out at the end.

If three bonus symbols land they’ll lock in place and the Lock & Spin feature will start again – your aim here is to have nine bonus masks locked in view in the middle area of the grid and then the free spins will be triggered. Ten free spins are awarded and there’s a multiplier feature which will increase y 1x every time a multiplier symbol lands.

Pressing the thumbprint will not only spin the reels but it may also trigger one of the following modifiers:

Look out for those numbers above the reels because they’ll slowly unlock, ultimately rewarding the player with up to three free spins with all low value symbols removed when all six numbers are displayed.

On any spin question marks can land which will then transform into matching symbols to try and help with cluster creation – this seems to work better here than on a standard slot machine as these symbols can create their own instant clusters.

Code Breaker Clusters is interesting and atmospheric stuff with some enticing, if not particularly innovative features; note that the Code Breaker feature will retain your progress at each bet level. Overall we would recommend this slot.

Code Breaker Clusters is a crime-themed video slot from BB Games with five reels and a cluster gameplay mechanic.

The Return To Player percentage for Code Breaker Clusters is 96.18%.

How To Win On Code Breaker Clusters?

Land clusters of at least six matching symbols. Trigger one of the features.

Where can I play Code Breaker Clusters?