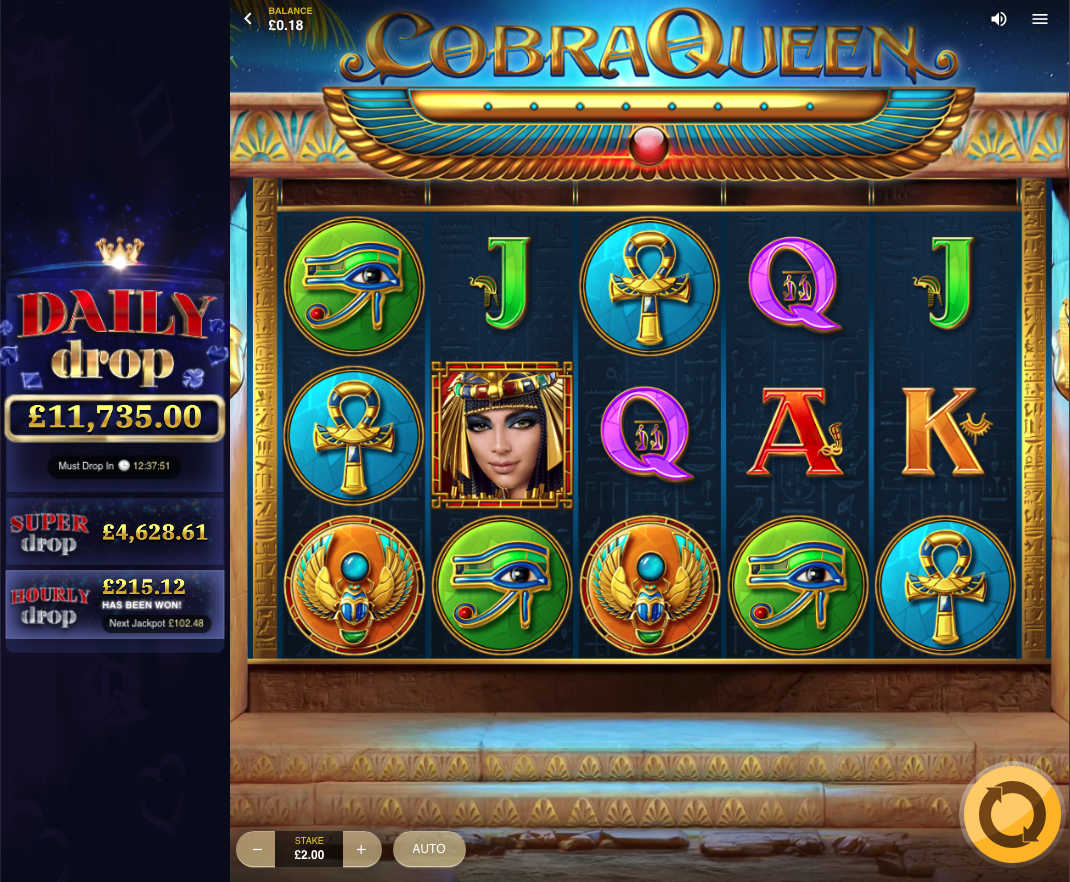 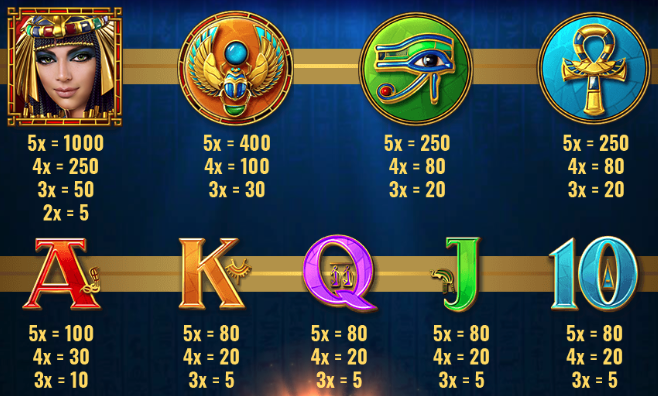 The dusty heat and the scorched palm trees of Ancient Egypt tell us that this is an online slot machine themed on that long-gone empire; it’s called Cobra Queen, it’s developed by Red Tiger Gaming and from £0.20 per spin it introduces a clever base game wild feature along with free spins and three progressive jackpots.

Cobra Queen is a five reel slot with three rows and ten fixed paylines; gold statues of Osiris stand guard on either side of those reels and if you’re playing in full screen you’ll see a backdrop featuring hazy pyramids under a twinkling night sky.

High value symbols include the Cobra Queen herself, the Eye of Ra, the golden ankh and the scarab beetle; 10, J, Q, K and A represent the lower values. The Pharaoh is the scatter symbol and we’ll explain how the wild works shortly.

This is an interesting feature and it will activate with each winning combination – the final symbol in that win will turn into a wild, lock in place for the next spin and retain the value of that win. If that wild symbol is involved in a win on the next spin it will again lock in place and award the total of this win and the previous win – this continues as long as the wild appears in a winning combo.

This is triggered by landing three of the Pharoah scatter symbols anywhere on reels one, three and five and ten free spins will be your initial reward.

Any wilds which are created will lock in place and remain there for the whole round, retaining their win values in the process; two extra spins are awarded if a whole reel contains locked wild symbols.

This is triggered from the base game by landing three of the jackpot symbols which will award the Super Drop prize shown to the left of the reels. There’s also a Daily Drop Jackpot and an Hourly Drop Jackpot which must pay out before the time shown.

Innovation is always a welcome thing and we believe the Locking Wilds feature gives us something genuinely new; chuck in some free spins and three progressive jackpots and Cobra Queen is one not to miss.

Cobra Queen is an Egyptian-themed video slot with three rows and ten paylines.

The Return To Player percentage for Cobra Queen is 96.02%.

How To Win On Cobra Queen?

Land at least three matching symbols starting from the left hand side; trigger either of the features or grab a progressive jackpot prize.

Where can I play Cobra Queen?