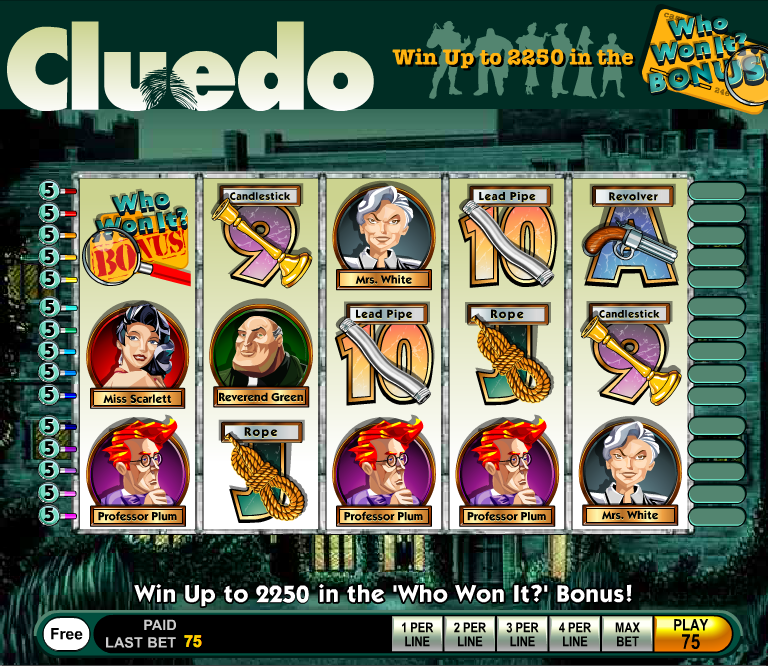 Cluedo is the board game which continues to captivate millions of players around the world and the good news for online slots players is that there are a number of games available at our recommended casinos based on this murder mystery. IGT have produced a couple of the best – Cluedo Classic is a prime example – and Cluedo Who Won It? is designed in a  similar theme.

Cluedo Who Won It is a five reel and fifteen payline game set against the gloomy backdrop of a mysterious mansion. All the familiar characters are here – Reverend Green, Mrs White, Colonel Mustard, Mrs Peacock, Professor Plum and Miss Scarlett – and the murder weapons are also present in the shape of a candlestick, lead pipe, rope, spanner, dagger and revolver.

The scatter symbol is a Cluedo picture frame, the wild is a newspaper and there’s a bonus magnifying glass symbols which activates the main feature.

Who Won It? Bonus

Apart from the goodies offered by the scatter and wild symbols, there’s only one bonus feature in this game; it’s the Who Won It? Bonus and it’s triggered by landing three of the magnifying glass icons on an active payline.

You can choose to accept the offer or try agains for a better one but you’ll have to take the third reward offered.

We all want to trigger the bonus feature in this game but to do that you’ll need three of the bonus symbols on an active payline, not scatters. Play with the maximum available lines to endure the best chance of doing so.

There’s a lot to like about this game – it looks and sounds good and, like Cluedo Classic, it captures the essence of the board game pretty well. The feature is also nicely designed and this is slot well worth checking out.