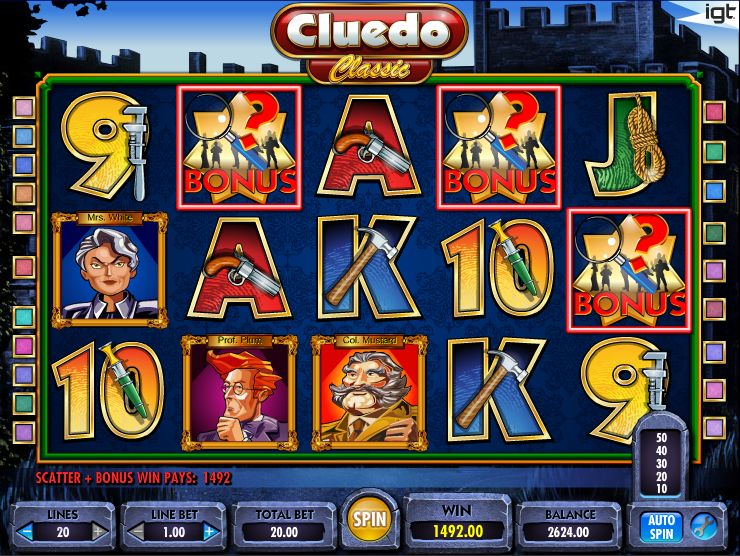 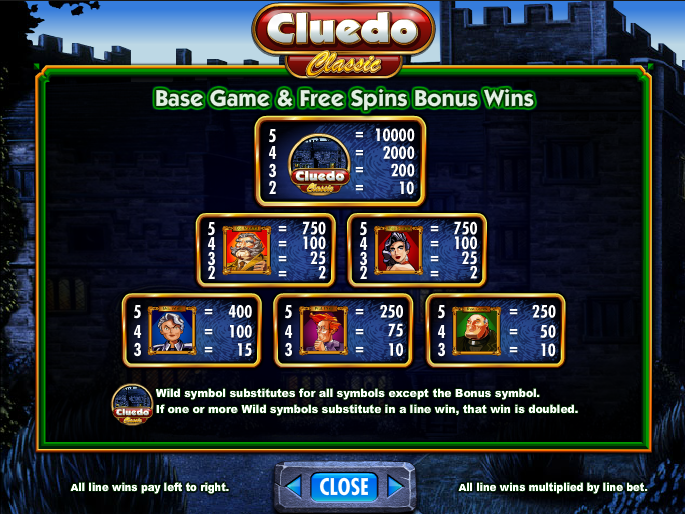 If you read our recent review of Mystery Manor then you’ll know that we though it took it’s influence from the iconic game of Cluedo. Now here’s the real thing – Cluedo Classic from IGT – and it’s an online slot which is designed to look exactly like the original board game. You won’t get to track down the murderer here but you will get to hunt for the bonus feature.

Cluedo Classic looks great and it’s played out over five reels and twenty paylines; the backdrop to the game is a darkened castle – the location of the dastardly murder. The lower value symbols are 9, 10, J, Q, K and A but each symbol also contains a potential murder weapon such as a wrench, a knife, a noose, a candlestick, a hammer and a pistol.

The Cluedo Classic logo is wild and there’s a mystery, magnifying glass symbol which activates the bonus feature.

This is the only feature included in this game and you can win it by landing three or more of the mystery symbols anywhere on the reels. As well as winning a payout for matching the scatter symbols, you will also be awarded 15 free spins which is always worth celebrating.

Just click ‘Spin’ to kick the reels off and everything you win during this round will be tripled. It’s also possible to re-trigger the spins by landing more scatter symbols. There’s a maximum of 180 spins available for the luckiest players.

Play with as few paylines as you want if you’re just trying to trigger the free spins – they’re activated by scatter symbols anyway. More paylines mean bigger payouts though.

This game looks and sounds good but there’s a feeling that the bonus round could have been a bit more imaginative, considering the way the board game works. Worth a few quid though.