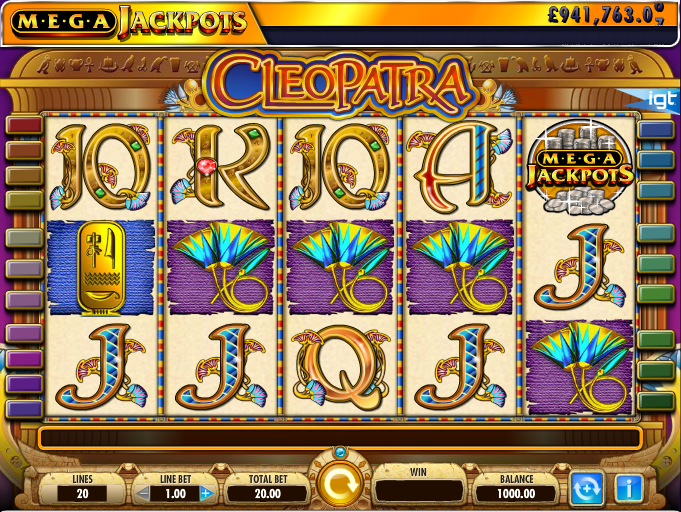 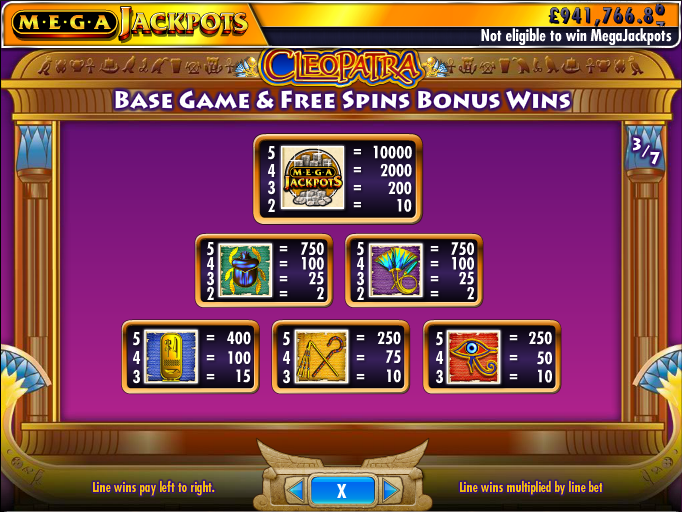 Online slots based on ancient times and characters always offer something different to the slots enthusiast; we’ve reviewed slots based on Norse, Roman and Greek gods but this slot is based on a person who actually existed – Cleopatra.  Cleopatra lived between 69BC and 30BC and  was the last pharaoh of Ancient Egypt as well as being the partner of Roman politician Mark Antony.

This slot from IGT is a five reel and twenty payline game which features a number of Egyptian references; the reels are set against columns decorated with hieroglyphics and we’re made to feel as though we’re in some sort of Egyptian temple.

The lower value symbols are 9, 10, J, Q, K and A and each is ornately decorated to look a little less boring. The higher value symbols are represented by a range of Egyptian symbols including the Eye Of Horus and a scarab beetle.  Cleopatra herself is the wild most valuable symbol and also the wild.  The Sphinx is the scatter symbol and triggers the bonus feature as well offering 100x your total bet if you can land five on the reels.

**Update** IGT have released a Mega Jackpots version of Cleopatra with the chance to win a progressive jackpot. **

The free spins round is triggered by landing three or more of the sphinx scatter symbols.

During this round every prize you win will be tripled and the really good news is that landing three more scatters will win you another fifteen spins although there’s a limit of one hundred and eighty in total.

If you are playing the progressive version of Cleopatra then the way to win the big bucks is to land five of the Mega Jackpots symbols on the centre payline in the base game or free spins. Any non-winning spin can also trigger the Second Chance – a behind-the-scenes random chance to win the prize.

The bigger your stake, the greater the chance of winning the progressive jackpot so bear that in mind when setting you bet level.

IGT’s Cleopatra is a nicely designed game with a free spins feature that seems to occur regularly; the soundtrack is a little odd but bursts into mystical life whenever you land a win on a payline. The addition of a progressive jackpot is certainly welcome.