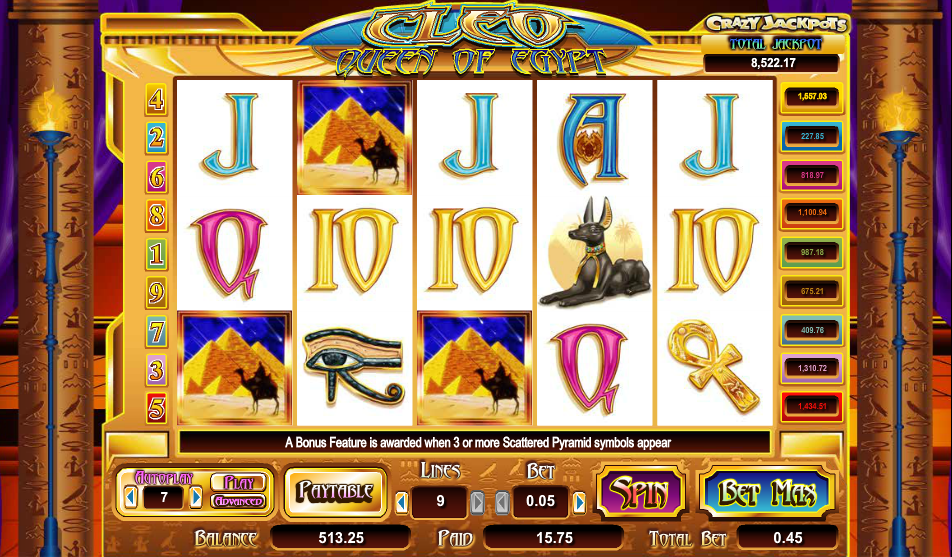 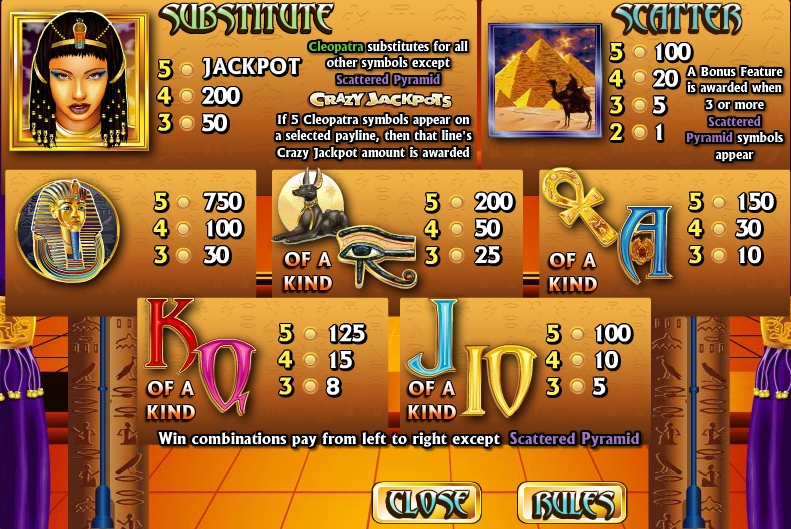 The ancient world offers plenty of scope for online slots developers  and some of the old civilisations are more popular than others. Egypt is a regularly visited destination with it’s panoply of famous rulers and interesting gods and here we have one more game to add to the list – it’s called Cleo Queen Of Egypt and it was originally developed by Cryptologic which is now owned by Amaya Gaming.

Cleo Queen Of Egypt is a five reel slot with three rows and up to nine paylines; it’s a pretty standard Egyptian slot setup with hieroglyphic-adorned columns to the side of the reels and a location inside some sort of temple.

High value base game symbols include a Sphinx, an Eye Of Ra, Anubis and a golden Ankh; 10, J, Q, K and A make up the lower values.

Cleo (perhaps she prefers Cleopatra) is the wild symbol which substitutes for all others except the scatter – that’s represented by a view of the Pyramids and it activates the main feature.

This is an interesting addition and you will notice nine jackpot amounts to the right of the reels; these each correspond to an active payline and are also proportional to your stake (i.e. the higher your stake, the bigger the amounts).

The way to win these jackpots is to land five of the Cleo wild symbols on that particular payline and that cash prize will be yours.

This is triggered by landing three or more of the pyramid scatter symbols anywhere in view and you will be taken to a screen displaying a wall full of hieroglyphics to select. All you have to do is pick those symbols to reveal prizes and multipliers until you find the trapdoor at which point the round is over.

Cleo Queen Of Egypt is just about playable but there are certainly better Egyptian-themed slots around these days (see our top five here). We do like the Crazy Jackpots though – something we’ve not seen before.