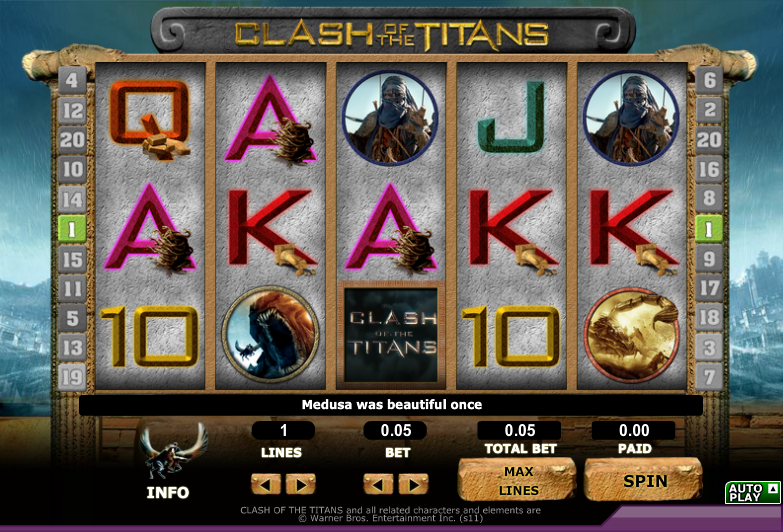 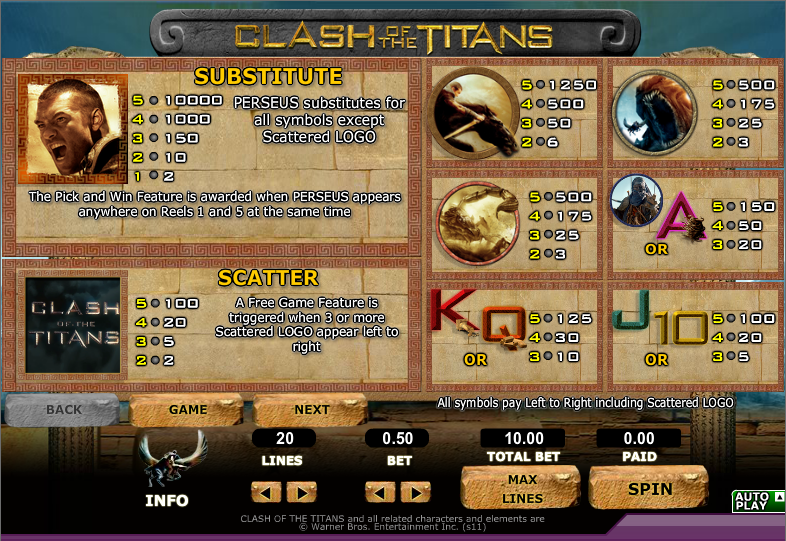 Older slots fans will surely remember the original Clash of the Titans movie from way back in 1981 which featured Harry Hamlin as the hero Perseus and Lawrence Olivier as Zeus.  This online slot from Random Logic though is based on the more recent 2010 remake which features Sam Worthington and Liam Neeson in those roles.  It’s a story of Greek mythology and humans vs gods.

The Clash of the Titans slot is a five reel game with twenty paylines and it contains lots of stills from the film which add to the already high quality. Apart from the low value playing card icons, the symbols are a mix of characters from the film and the monsters they have to defeat.

Pursues himself is the high paying wild and he also triggers one of the bonus features; the game’s Clash of the Titans logo is the scatter symbol which triggers the free spins.

Twelve free spins are available when you play this slot and to trigger them you’ll need to land three or more of the Clash of the Titans scatter symbols anywhere on the reels.

This is definitely a worthwhile bonus to get your hands on because all wins during the free spins will be tripled and it’s also possible to activate the Pick and Win feature from here.

This is a pretty simple game which can be triggered from the base game or from within the free spins round; it’s activated by landing Perseus on reels one and five and you must then choose one of those symbols to reveal a prize.  If you’re lucky you mitt get the chance to pick again.

You don’t need to be playing every payline to activate the bonus features because they’re both triggered by scatter symbols – you’ll win proportionately more money if you do though.

There’s some dramatic music to accompany your gameplay and some nice graphics and animations also.  Two bonus games should keep most slots fans entertained.