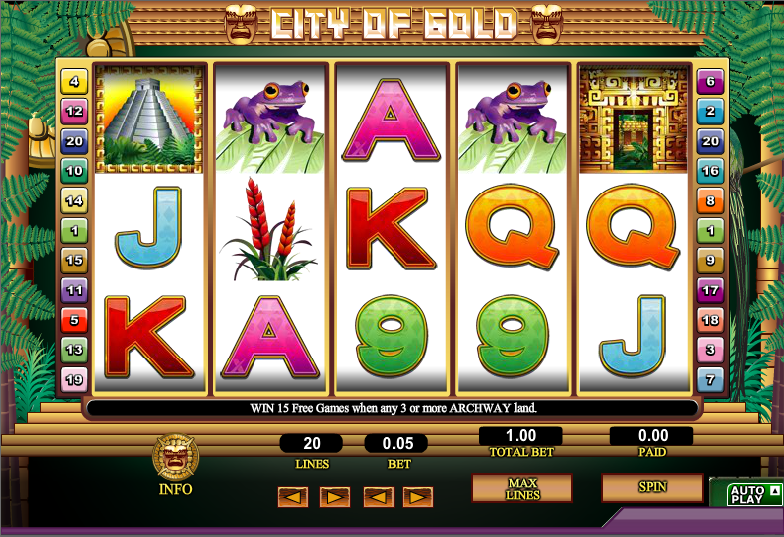 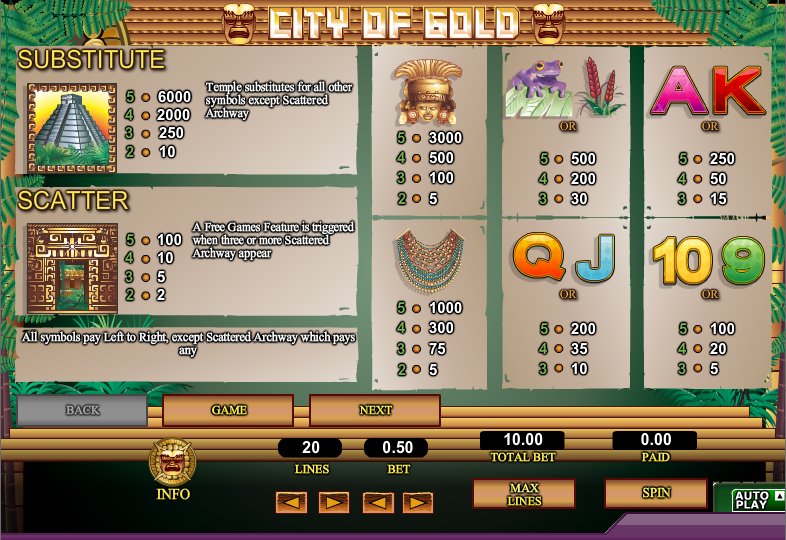 The ancient civilisations of South America provide plenty of inspiration for online slots developers and Random Logic have chucked their hat into the metaphorical ring with City Of Gold. Although of a similar theme it should not be confused with Microgaming’s City Of Gold, a three reel classic slot which lacks the bonus features and added extras on show here.

City Of Gold plays out over five reels and twenty paylines and no-one will be surprised to hear that the reels are set in front of an Aztec-style temple; encroaching undergrowth frames those reels, ready to swallow the temple while when this great civilisation comes to an end.

The usual playing card icon make up the lower value symbols but higher up the value scale we have an ornate necklace, red plants, a frog and a golden mask.

The wild symbol is represented by a grey pyramid rising above the tree line and there’s a scatter symbol showing a golden temple doorway which activates the main feature. The wild will substitute for all symbols except the golden archway scatter.

That golden archway scatter symbol is the key to this feature and you will need to land three or more to kick it off. On top of the prize for the combination created you will also receive fifteen free spins, which is not to be sniffed at.

Everything you win during this round will be tripled and the really good news is that it’s possible to re-trigger more spins by landing more scatter symbols.

If you’re a low roller you can play this game in the knowledge that you have the same chance of triggering the feature playing one or twenty paylines because it’s activated by the scatter symbol. The prizes available will be lower though.

There’s not much to recommend this above the various other Aztec/Inca-themed slots out there but give it a go if you want to complete the collection.