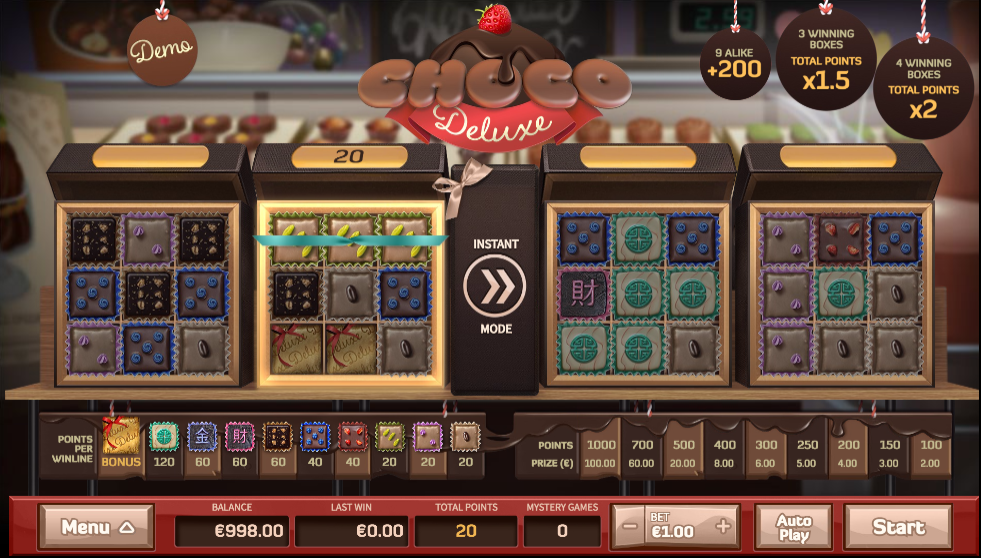 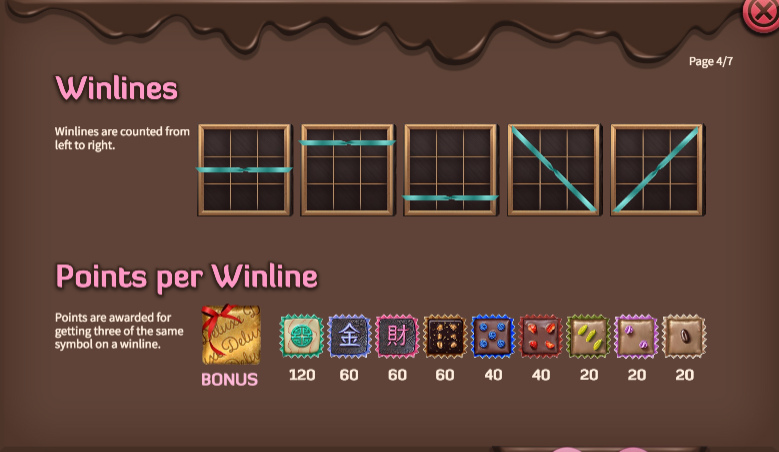 A gentle piano soundtrack welcomes you to the world of Choco Deluxe as you load up this candy-themed online slot machine from Air Dice; it has some unusual gameplay and an interesting way of calculating your winnings but you can find out all about that here.

Choco Deluxe plays out over four boxes of chocolates, each acting as a set of three reels with five paylines each; we seem to be looking at a display in the window of a confectionary shop because there are lots more tasty treats in the background.

There are nine different chocolates representing various symbols in Choco Deluxe and each is topped with an an item denoting it’s relative value; the three most valuable contain Chinese symbols.

There’s no wild symbol but there is a bonus chocolate wrapped in gold which activates the main feature.

Each time you press ‘Start’ all four reel sets will spin and any wins will be assigned a points value; when that points value reaches a certain level it will be worth whichever cash prize is applicable – the table below shows the points conversion for a total bet of £1.00 per spin.

As an addition to the unusual gameplay described above, there are also three mini-bonuses which can occur in the following circumstances:

This is triggered by landing three of the golden wrapped bonus chocolates on an active payline; you will now be presented with four boxes of chocolates depending on how many winning lines you achieved.

Now all you have to do is pick from those chocolates in the box(es) to reveal the following bonuses until you find the ‘Collect’:

You will always start this round with 80 points to get the ball rolling.

Choco Deluxe is a very unusual slot but it’s good fun to play nonetheless; some of the chocolates really do look good enough to eat and there are some inventive features which add to the gameplay experience.