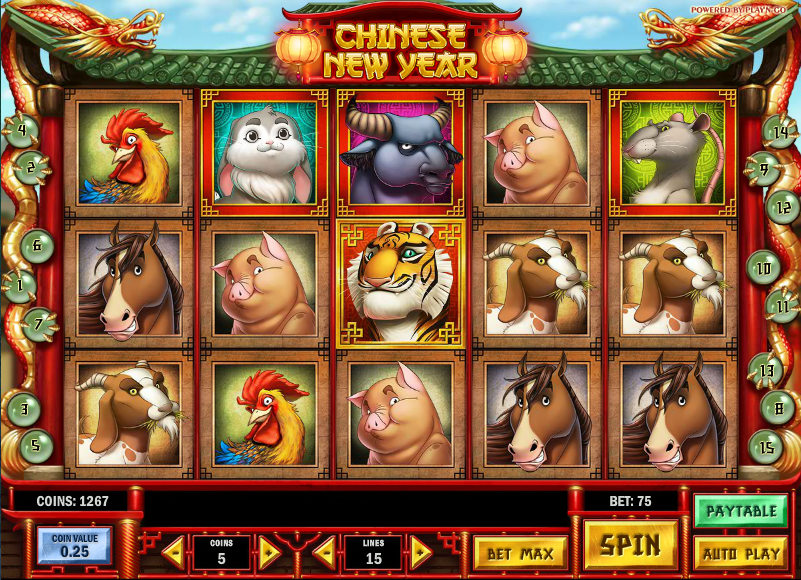 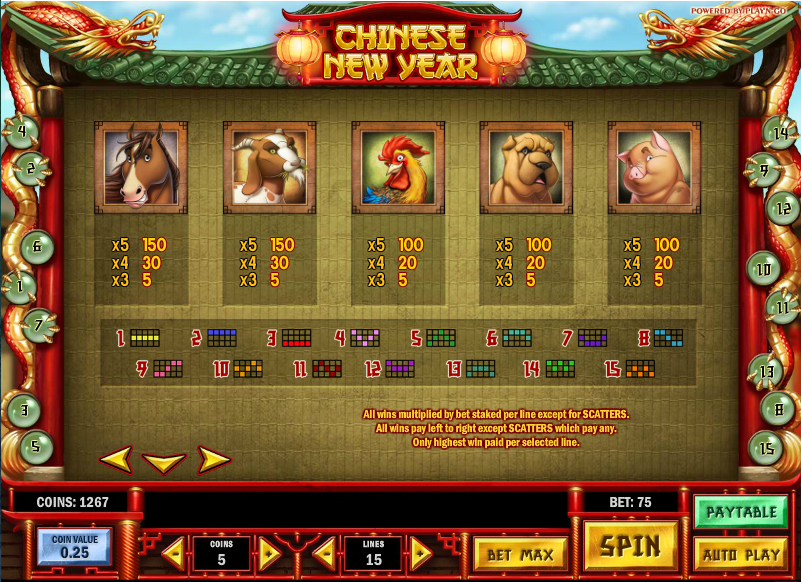 Those in search of an online slot with an oriental theme never have to look too far; there’s a whole entertaining range available and you can check out our top five by clicking here. Play N Go now have their own entry into this genre and it’s called Chinese New Year. Also known as the Spring Festival, it occurs in late January or February and it’s celebrated everywhere there’s a Chinese diaspora.

Chinese New Year is a superb-looking five reel slot with fifteen paylines; as with many of this genre the reels are set against an ornate temple but it’s the symbols which catch the eye. They are all animals which represent Chinese years and so we have a rat, an ox, a rabbit, a snake, a horse, a goat, a rooster, a dog and a pig.

The wild symbol is the tiger and then there are two bonus symbol to make up the animal set, a monkey and a dragon.

Those cheeky monkey scatter symbols on reels one, three and five are the key to this feature and you will need to land three of them anywhere on the reels to kick things off. The monkey will then light and spin a fireworks wheel and when it stops, one of the symbols on it will be selected to act as an extra scatter. The monkey will then strike the gong to reveal the number of spins awarded.

The spins will now begin but they can’t be re-triggered again during this feature.

This feature is triggered by landing three of the dragon symbols anywhere on reels three, four of five. You will now be taken to a lakeside setting at which you will see five giant fireworks rockets. Just pick them one by one and watch them fly off and explode, earning you a prize with each boom. When you find the dud the game is over.

Any win can be gambled by clicking the ‘Gamble’ button underneath the reels. Here you can try and double or quadruple your win by correctly guessing whether the next card drawn will be the right colour or suit.

We always advise caution when using the gamble feature; use it only occasionally because it’s the quick way to deplete your bankroll.

Play N Go make some really top notch slots and this is one more to add to the list; it looks great, the background music is fantastically oriental and there are two excellent bonus features.