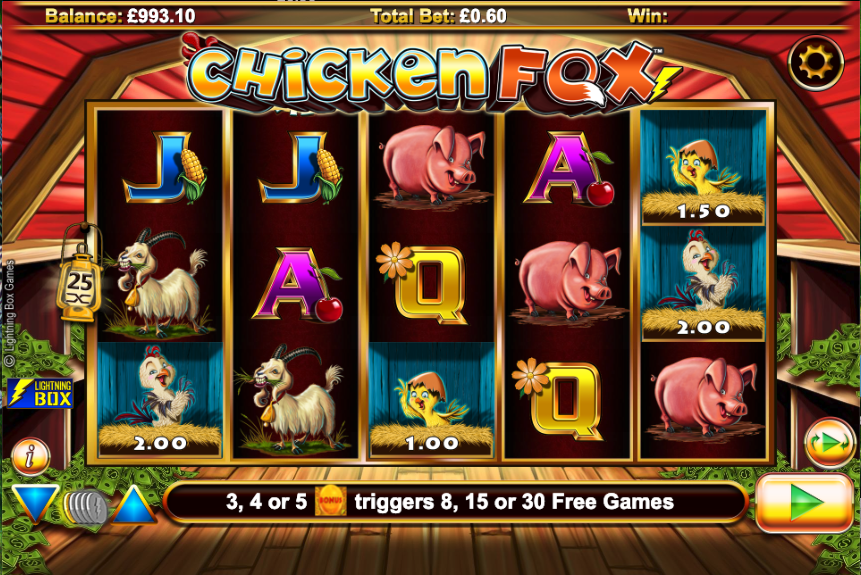 A traditional red barn filled with banknotes sounds like an ideal setting for a farm-based online slot machine and that’s exactly what we have with Chicken Fox, a game developed by Lightning Box with some clever free spins and a host of farmyard characters.

Chicken Fox is a five reel slot with three rows and twenty five fixed paylines; the interior of that red barn is where those rels spin with cash spilling out from the shelves on either side.

The high value symbols are all related to the theme and include four chickens along with a tractor, a pig and a goat; 10, J, Q, K and A make up the lower values.

In the base game the lady with the pie is wild and she’ll substitute for all others to form winning matches except for the golden egg bonus symbol.

This is triggered by landing three, four or five of the golden egg scatter symbols anywhere in view for which you will receive 8, 15 or 30 free spins respectively; there’s also some interesting extra stuff going on in this round which could make it a bit more profitable:

Chicken Fox is a cheerful, animal-themed slot which would be enjoyable even if it were not for the inventive free spins round and the good news is that the chickens never seem to be in any real peril from the marauding foxes. It’s good fun and definitely recommended.