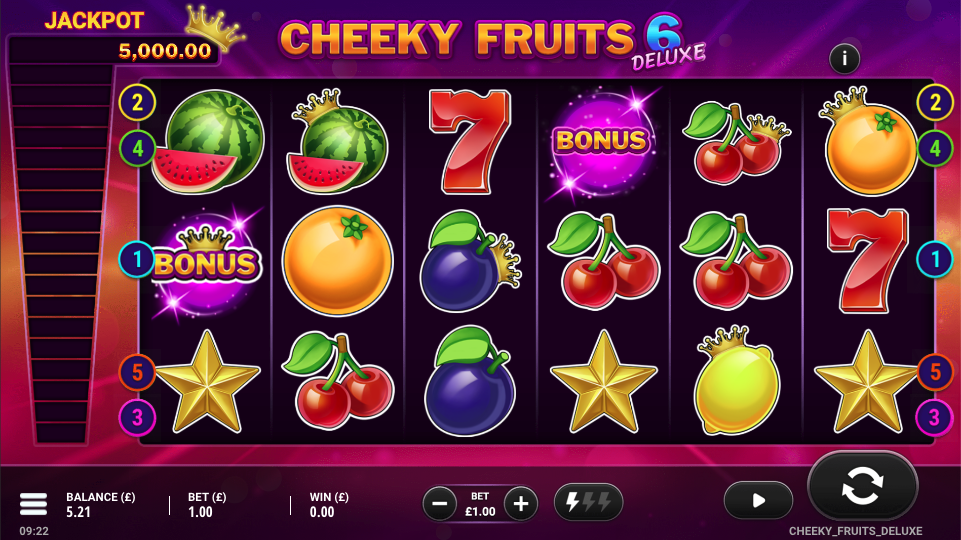 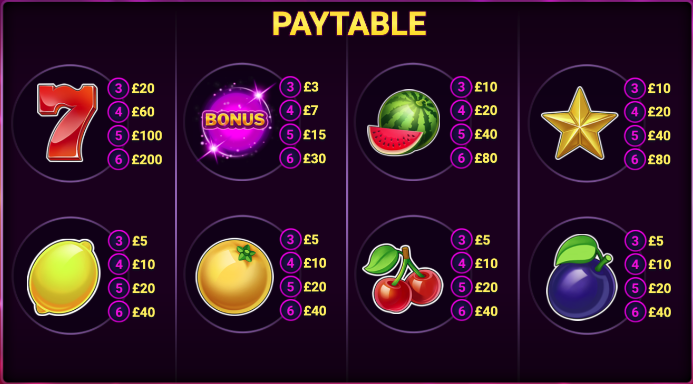 If you’ve previously played Cheeky Fruits from Gluck Games then you’ll be pleased to know that there’s now a sequel with the similar name of Cheeky Fruits 6 Deluxe; it’s an online slot which cranks up the fruity action with an extra reel and a jackpot feature with a top prize of 5000x your stake.

Cheeky Fruits 6 Deluxe is a six reel slot with three rows and five fixed paylines; that sparkly fruit spins against a backdrop of flowing, pastel colours and on the left hand side is the jackpot meter which we’ll explain a bit further down.

The high value symbols are the red sevens, gold stars and a fruity bunch including watermelons, lemons, oranges, cherries and plums; there’s no wild symbol in this game but there is a sparkly, purple bonus system which activates the main feature.

Some of the symbols will appear with a crown when they appear on the reels and each crown will increment the jackpot meter by one place; it’s all or nothing here so to win the jackpot prize you’ll have to have a crown on each of the eighteen symbols on the same spin for a prize of 5000x your stake.

Landing three, four, five or six of the purple bonus symbols anywhere on reels one, three and five will award 10, 15, 20 or 25 free spins; on each spin one of the standard symbols will be picked at random to become giant and fill up all positions on reels two, three and four, making it easier to grab some bigger wins.

Cheeky Fruits 6 Deluxe combines some traditional fruity gameplay with some high quality graphics, an extra reel and some fine features to give us an engaging and enjoyable slot – highly recommended!