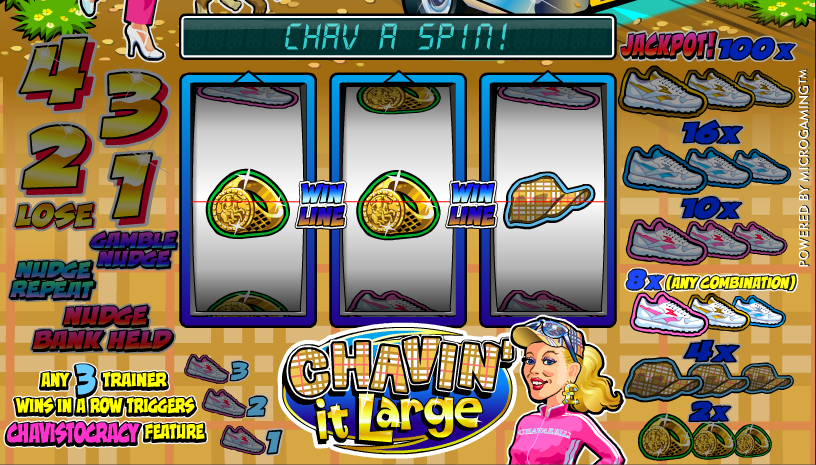 Chavin’ It Large is an entertaining online slot from Microgaming which relies on a slightly outdated stereotype for it’s laughs. Nevertheless it’s well designed and we are confirmed fans of these fruit machine-style games so read on to find out what we think of this release.

Chavin’ It Large is a three reel and single payline slot and the theme is arguably more Essex than chav although perhaps there’s some crossover there. The screen is adorned with stilettos, pick tracksuits, Burberry checks and trainers.

There are only six different symbols, a massive gold sovereign ring, a Burberry baseball cap and four different coloured trainers which are the key to reaching the bonus feature. The most valuable trainers are the gold ones which are worth 100x your stake if you can land three on the payline.

This is quite a lucrative bonus but it’s also quite hard to trigger; you will need to land three consecutive winning combos, all featuring trainers. Different colour trainers mixed up can also make a winning line.

You will be taken to a screen displaying your huge, bad taste house and stretch limo and on that limo are a number of multipliers ranging from 25x to 250x. All you need to do is stop the flashing light on a random multiplier and reap the rewards.

Now you will get a chance to repeat the bonus by playing a 50/50 game; you can see ‘Yes’ and ‘No’ written on the gateposts either side of the car.

Nudges will be awarded randomly and allow the player to jog single reels down with the aim of making winning combos. They may occasionally be repeated, gambled or banked until the next spin.

Holds let the player freeze any or all of the reels in the hope that the free reels will make a match on their next spin. 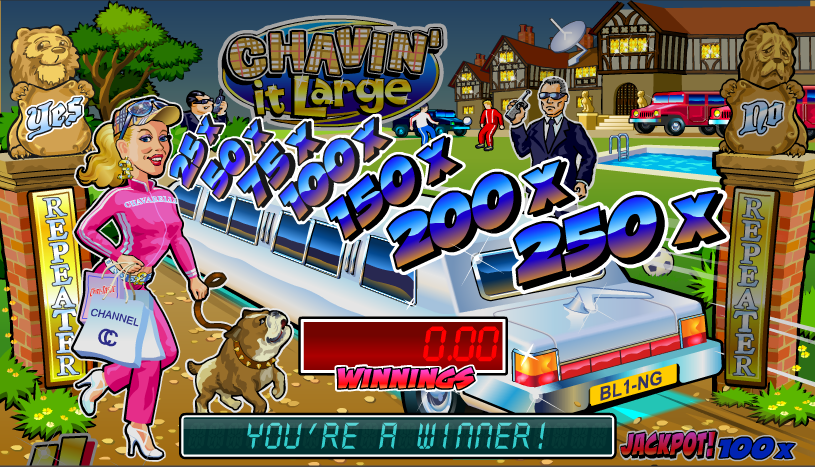 The theme is entertaining but this three reel slot doesn’t have the same appeal as most of Microgaming’s other UK-style slots, particularly as the feature is so tricky to reach. This is perhaps more for the classic slots purist than the fruit machine fan.